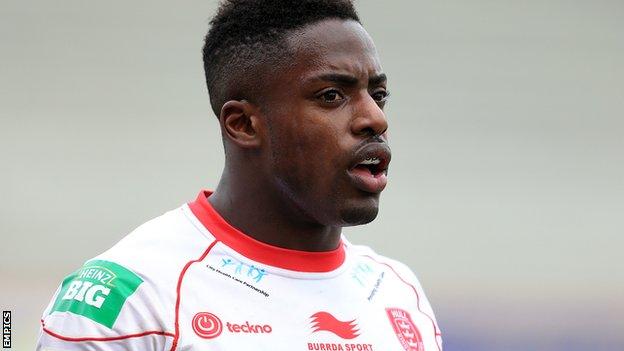 Hull Kingston Rovers bounced back from their record 84-6 defeat by Wigan on Monday to complete an exciting victory over St Helens at Craven Park.

David Hodgson scored in the corner and Josh Hodgson went over from dummy-half to give Rovers an early advantage.

Cory Paterson put Rovers back ahead, but wing Adam Swift's intercept pulled Saints back to within two points before Alex Brown's score secured the win.

It wasn't pretty and we didn't execute as well as we would have liked. But it was a very gritty performance

Saints, who were looking for their first win at Craven Park since 2007, lost Mark Flanagan to a third minute knee injury and conceded the game's first try when Rovers' scrum-half and play-maker Michael Dobson - who missed the Wigan debacle - passed to Greg Eden, who in turn sent David Hodgson over in the left corner for his ninth try of the season.

The Robins increased their lead when Josh Hodgson spotted a gap under the posts to stretch out and score from dummy-half.

But Rovers were guilty of not defending the blindside when Percival was sent over the line by Tommy Makinson.

Rovers went back in front when Paterson was in the right place to take Dobson's clever assist, despite the attention of Saints captain Paul Wellens.

Saints showed their class by turning defence into attack when Eden's pass went to ground and Swift swooped to pick up the loose ball and sprint 90 metres untouched.

Back came the Robins and on the right hand side of their attack, Eden showed great hands to get the ball outside to his winger Brown to score.

"Michael [Dobson] and Cory [Paterson] are the heartbeat of this team, and to have them and Dave Hodgson playing was a big boost.

"I'm very pleased with the efforts of the players although it wasn't pretty, we didn't execute as well as we would have liked. But it was a very gritty performance.

"I could tell by the first few sets that we weren't quite there. Our kicking game was really poor and while our goal-line [defence] was great, our defence elsewhere wasn't.

"Our best player was Francis Meli and he's the only one to have had a rest over Easter. It's not an excuse, there wasn't a lot we did well.

"Hull KR were a bit down on confidence and they probably didn't know how to win the game for a while. I counted 40 times when they stood in the tackle and played the ball which shows we weren't quite there.

"Today wasn't a good day for us but we'll dust ourselves down off for Catalan next Friday."