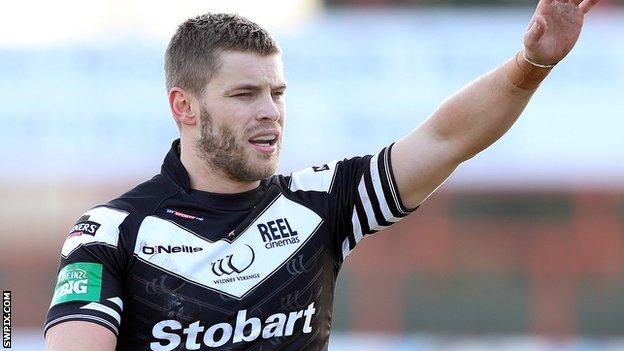 Rhys Hanbury and Cameron Phelps both scored hat-tricks as Widnes romped to a 10-try victory against Salford.

It was the first time that Widnes had scored more than 50 points since returning to Super League last season.

Theo Fages, Lee Jewitt, Jodie Broughton and Jordan James touched down for the Reds, who stay second from bottom.

Brown's try was his first since joining Widnes from Huddersfield, to cap a wonderful day for the hosts.

Denis Betts's side had been the victims of an

But the return of hat-trick heroes Hanbury and Phelps, as well as Brown and skipper Clarke, inspired a thumping of their own as the Vikings cruised to a fourth win of the season.

Brown, who had missed the previous five games with an ankle problem, made an immediate impact, kicking for full-back Hanbury to touch down in the corner.

Youngster Jack Owens, who successfully kicked nine goals on the day, set up hooker Clarke and centre Phelps to give the home side a 16-point lead.

Marc Sneyd's kick bounced favourably for Fages to get Salford on the scoreboard, and the deficit was reduced further when Jewitt crossed from close range.

Widnes, through Mellor, Phelps and two more from Hanbury, then scored four times without reply either side of half time to put the result beyond doubt.

Hanbury turned provider to send Phelps over for his hat-trick, while Winterstein and Brown dived over in the closing stages to seal a convincing victory for the Vikings.

A breakaway effort for winger Broughton and another from prop James were merely consolations for the Reds.

"Rhys Hanbury's pace is freakish. His passing game is very good and he is playing the new position very well.

"The role of the full-back has changed over the last four or five years as Sam Tomkins has shown.

"It was good to get Cameron Phelps back and Kevin Brown was dominant at half-back.

"I have got to feel for Salford, with the way things are going for them. It's tough coming here and I'm pleased with our performance. I know Salford scored 24 points but I was pretty happy with our defensive effort."

"Everything Widnes did came off. They played with confidence and were able to rotate their squad.

"The try 30 seconds before half time which made it 28-12 took the game away from us. If they hadn't scored that try, our guys had something to build on.

"Rhys Hanbury, Gaz Hock and Kevin Brown showed their skill. Hanbury is having a 'wow' of a season and scoring tries for fun.

"Brown is international class and Hock was destructive and we struggled to handle the three of them."