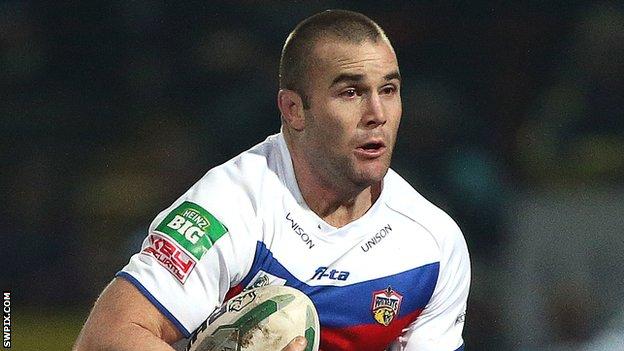 Wigan Warriors, helped by the first-half dismissal of Wakefield's Justin Poore, returned to the top of Super League with victory at the DW Stadium.

Australia prop Poore was sent off after 11 minutes for punching Liam Farrell.

Wigan, who were without injured captain Sean O'Loughlin and the prolific Pat Richards - who was delayed in returning from his brother's wedding in Australia - move a point above Huddersfield at the summit.

Shaun Wane's side put in another high-scoring display to extend their winning run to four matches.

Tomkins, named Wigan's captain in the absence of O'Loughlin, set up their first two tries for Thornley and Gelling, who was starting in place of Richards.

The game's flashpoint - a spat between Poore and England youngster Farrell - resulted in a red card for the Wakefield man.

It sparked the visitors into life and they were soon into a surprise two-point lead with scores from forward Mellars and full-back Mathers.

However, Wigan were back in control by half-time, with Thornley and Tomkins going over in quick succession.

A right-wing move resulted in a score for centre Goulding and Farrell stretched the lead further before the break when he outpaced Mathers to touch down in the corner.

Cook Islands international Gelling and Tomkins both notched their second tries of the afternoon shortly after the interval, but Richard Agar's Wildcats kept in contention with scores from Smith and Aiton.

Tomkins had the final say, racing in from 70 metres to claim his third try of the afternoon - and his 13th of the season.

Wigan's margin of victory could have been larger but, in Richards's absence, stand-in kickers Matty Smith and Sam Powell between them could only convert four of their nine tries.

"I don't think we were great defensively and we didn't have a lot of energy. It wasn't our best performance.

"We are happy with that but there are some areas we need to work on. It is a long season and you need to work on those areas consistently to make sure you are better the week after."

"During the last 15 or 20 minutes we spoke about it on the bench that we were a bit disappointed we didn't get a good crack at them with 13 men.

"I thought we played some good stuff at times and the 12 men made it a difficult contest.

"It is hard enough to come to Wigan at any time of the year. To go down to 12 was a big blow especially after 10 minutes. I was extremely proud of them."

On Justin Poore's red card: "It was a sending-off, no arguments about that. It's not the 1980s. You can't do that sort of thing."