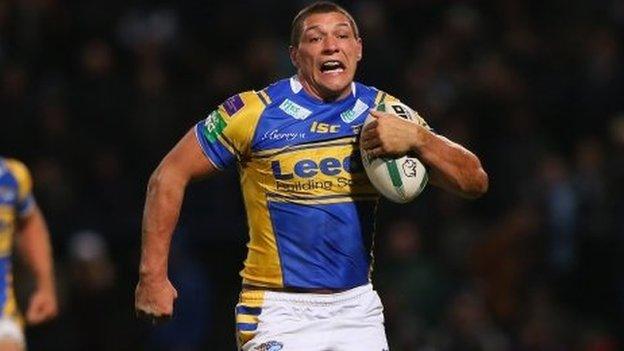 Super League champions Leeds leapt three places up the table as they beat Warrington at Headingley to repeat their 2012 Grand Final success at Old Trafford six months ago.

Hall then added a second before Joel Monaghan replied with his second score.

And Leeds, with two games in hand, are now just four points adrift of leaders Wigan after moving up to fifth, level with fourth-placed Warrington.

The Rhinos prevailed 26-18 that night, six weeks after Warrington had won at Wembley at Leeds' expense.

Hall got the game-sealing try that night and the England winger played an even more crucial role in the Headingley rematch.

Twice he demonstrated his uncanny ability to score from near-impossible positions by squeezing over in the corner for crucial tries to condemn former Rhinos coach Tony Smith's Wire to a fourth defeat of the season.

Leeds were also indebted to full-back Zak Hardaker, who made a big impact on his return from a six-week lay-off with a fractured thumb.

He created the position for McShane's try with a spectacular 60-metre break and pulling off try-saving tackles on Stefan Ratchford and Micky Higham as Warrington staged something of a second-half fightback.

As for Warrington, Smith revealed after the game that much-missed veteran half-back Lee Briers has been given the go-ahead to resume playing after being out since the second match of the season with a neck problem.

"I know it's a bit of cliche to say there are not too many people in the world who could get the ball down in those circumstances but I think it's accurate. And you could say the same about Joel Monaghan.

"We weren't that great defensively in the second half and Zak Hardaker had to save our blushes a couple of times.

"Lee Briers as been given the green light to return to playing and so it won't be long before he's back. He's one guy who has got a kicking game and we needed that tonight.

"Leeds' kicking game was chalk and cheese compared to ours. I thought Kevin Sinfield's kicking was terrific.

"I didn't think they were outstanding, just businesslike, and they did what they had to do. If they had been on their game, they would have smacked us. I thought our first half was dreadful, the worst we've produced for a while in terms of energy."