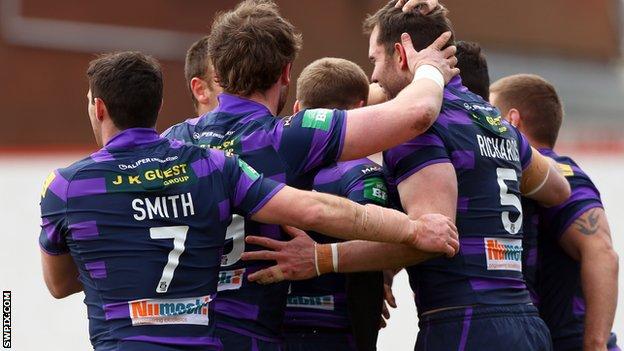 Coach Shaun Wane hopes Wigan's record Super League win at Hull KR will silence those who doubted his side.

The Warriors romped to a - their biggest-ever victory in the Super League era.

Many tipped Wane's side, who at the end of last season, to struggle in 2013.

"I remember those comments. They didn't give us a chance to do anything. That's been the driving force for me and the players," he told BBC Radio Manchester.

"Some of those comments hurt us. The only thing we're in control of is how we perform and I'll continue to drive the players hard to make sure our performances are up to scratch."

Wigan went top of the table after and followed that up with their thumping of Hull KR just three days later.

A new mark for Wigan

Wigan's 84-6 victory at Hull KR eclipsed their record Super League win, which was achieved when they defeated Workington 78-4 in 1996

"We played really well and some of our attack was really crisp," said Wane. "To come here and score the points we did was a great effort.

"We grouped the four matches together over the Easter period. This is three down and there's one to go."

"I certainly had it marked down," said the Australian. "It was a big occasion for me to come back to the club that gave me an opportunity in Super League.

"I wanted to put in a good performance but I didn't see a result like that coming."

Wane added that injured forwards and could return to the squad for Sunday's game against Wakefield.