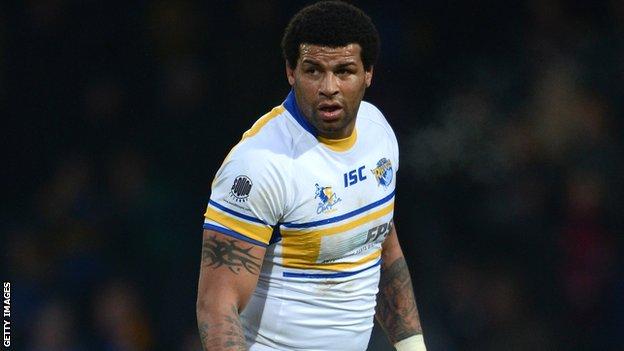 Leeds prop Ryan Bailey could be banned for up to five matches after being charged with two offences during the win over Catalan Dragons on Monday.

Bailey was sent off for striking Catalan half-back Thomas Bosc.

Grade B offences carry average bans of one to two matches, with two to three-game bans for Grade C punishments.

Castleford's Carney could be suspended for the second time in a month after he was charged with a Grade C dangerous throw during his side's 48-18 defeat at St Helens.

The Australian winger, 24, who joined the Tigers from Sydney Roosters in the winter, recently served a two-match ban after being found guilty of punching during the 52-0 defeat at Hull on 8 March.

Another Australian, Hull KR stand-off Burns, is accused of a grade B high tackle in the Good Friday derby with Hull.

Burns, 29, who missed Monday's club record 84-6 defeat by Wigan through injury, was forced to sit out the first four rounds of Super League in order to complete a 12-match ban carried over from his NRL career with Penrith Panthers.

He will face the RFL's disciplinary committee in Leeds on Wednesday, along with Carney and Bailey.

Huddersfield's England prop Crabtree, 30, will also appear in front of the committee unless he submits an early-guilty plea and accepts a one-match ban.