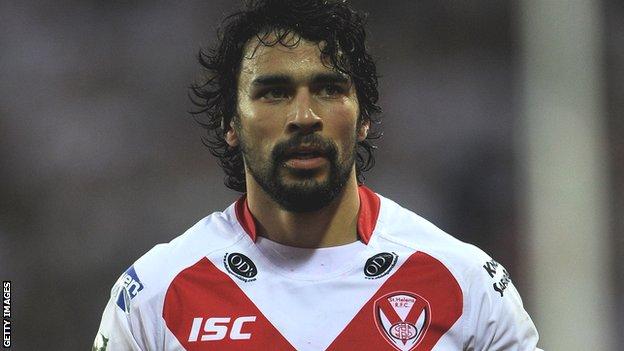 Ade Gardner has warned St Helens to beware a wounded Hull KR side when they travel to Craven Park on Sunday.

one of the in their last outing.

"Wigan have done us no favours twice this week," Gardner told BBC Radio Merseyside, referring to on 29 March.

"They've beaten Hull by 80-odd and so they (Rovers) will be wanting a much better performance on Sunday."

Saints winger Gardner continued: "It's a difficult place to go with a hostile crowd, so it's going to be tough.

I kept getting dizzy spells here and there, but the doctors have said that's normal - it was a big head knock

"We've got confidence to put on a good performance. Although we lost on Good Friday at Wigan I thought we played some good stuff, especially in the second half. Then on Monday, we've taken apart a talented Castleford team quite comprehensively."

Gardner, who has scored 170 tries during his career at St Helens, was absent from the squad for the at Langtree Park.

He was forced off the field before half-time in the defeat at Wigan three days earlier with a head injury and revealed it took two days to recover fully.

The 29-year-old said: "I was away with the fairies for a couple of hours. I didn't realise until I watched it back on television what I'd actually done.

"It happened so quickly. It's a bit scary to get knocked out and it took a good two days for me to feel with it. I kept getting dizzy spells here and there, but the doctors have said that's normal - it was a big head knock.

"I've been taking it easy, on doctor's advice, so I should be fine for Sunday."