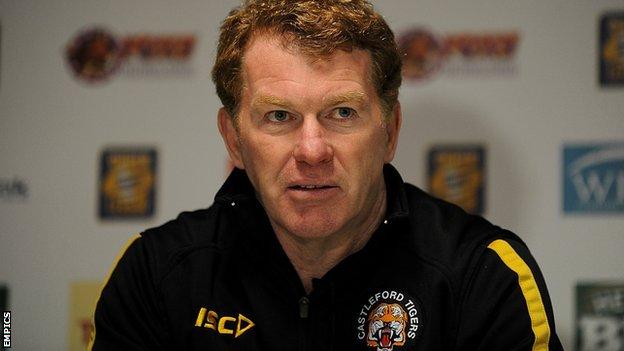 Castleford Tigers have parted company with coach Ian Millward and assistant Stuart Donlan after a disastrous start to their Super League campaign.

The Tigers sit bottom of the table with just one win and one draw from their 11 matches this season.

The former St Helens, Wigan and Leigh coach took over from Terry Matterson for the 2012 season but Cas struggled for form and finished in 13th place.

He leaves the club with a record of seven wins from 38 matches.

Of the potential successors John Kear looks a strong choice. The former Hull FC and Wakefield head coach once spoke of Cas as his "dream" job. Former Tigers forward Andy Hay may be in the frame yet could opt to stay as Hull FC assistant where coach Peter Gentle's position is far from secure. The Tigers may look at Featherstone's highly-rated coach Daryl Powell but the former Great Britain international is enjoying the challenge of leading a competitive Featherstone side in the Championship.

The 52-year-old is the second top-flight coach to lose his job this year after Salford sacked Phil Veivers after just five games.

The start of the Australian's tenure with the club was overshadowed by personal tragedy when he was granted compassionate leave in February last year after the sudden death of his 19-year-old son.

After he returned to the club in March, the Tigers suffered a fourth-round Challenge Cup exit at the hands of Championship side Featherstone in April and would go on to win just three more matches all season.

There was a large turnover of players in the close season but results failed to improve, with their only win so far this term coming against Leeds Rhinos in February.

Assistant coach Danny Orr will take temporary charge of the first team and is set to lead them in the home match against Widnes on Saturday.