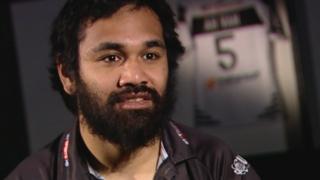 Widnes Vikings winger Patrick Ah Van tells the BBC's Super League Show that he is keen to represent Samoa at the Rugby League World Cup later this year, but admits he will face some tough competition for a place.

Team-mates Chris Dean and Jon Clarke pay tribute to Ah Van, who has become one of the best finishers in Super League.

The 8 April edition of the Super League Show is available now on the BBC iPlayer.

This video is only available to view in the UK.