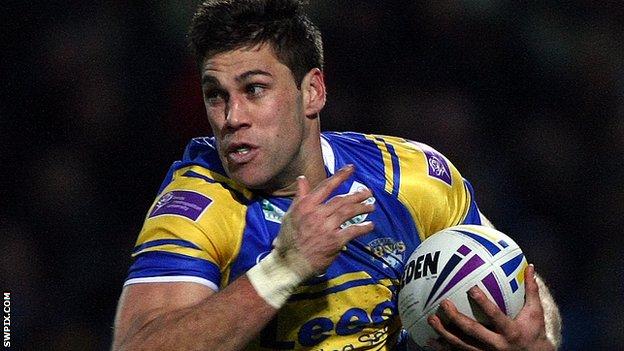 Champions Leeds Rhinos moved up to third in Super League with a convincing victory over London Broncos.

A low-scoring first-half at Headingley ended with the Rhinos 8-0 up, thanks to a try from centre Joel Moon and two goals from captain Kevin Sinfield.

But they took control in the second half, with Moon, Zak Hardaker, Danny McGuire and Kallum Watkins crossing.

Alex Hurst grabbed a late consolation score for the Broncos, who have now gone five games without a win.

On a rain-soaked night in West Yorkshire, Leeds had to revert from their usual style of play, but still managed a comfortable win.

McGuire's sliding kick set up Moon for the first try with Sinfield converting from out wide, and the England international added a penalty half-way through the opening period.

The visitors could have got themselves on the scoreboard on the stroke of half time, but Tommy Lee was unable to reach Chris Melling's grubber.

It was all Leeds after the interval. Sinfield and Moon combined again with the former Salford centre bagging his second of the match, before full-back Hardaker touched down Paul McShane's kick for the home side's third and McGuire went in underneath the posts.

Hurst was on hand to score London's only try of the game, with the full-back collecting Craig Gower's pass, but Leeds had the last word as centre Watkins took advantage for some untidy defending from the away side.

"London deserve a huge amount of credit. There were times in that game where the scoreboard could have turned into a blow-out, and I think it is more down to their defence than us that it didn't.

"There was a big chance that tonight would be a big test for us and any residue from the Easter period would be there, so I am pretty pleased. I didn't think it was ugly.

"The weather also slowed the game down tonight. We handled the conditions well because we have struggled the last two times we have played in ones like tonight."

"We lacked control in the first half and I felt we could have built pressure more than we did.

"We were good on effort up to half-time but I watched the first set after it and we missed two tackles which was not good enough.

"We didn't get to the kicks, we didn't compete hard enough on each side of the ball and it's not our night."