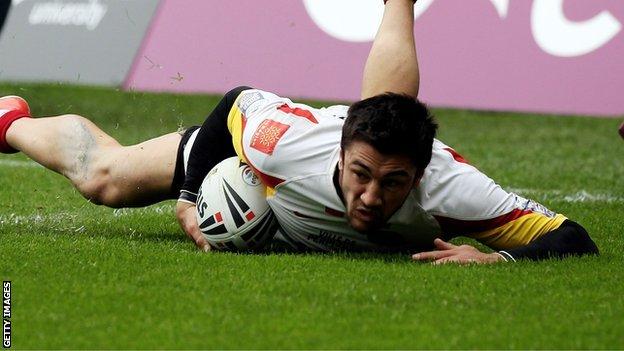 A superb defensive display from Catalan Dragons laid the platform for victory over St Helens at Langtree Park.

Frederic Vaccari and Morgan Escare touched down for Dragons to give them a 12-0 half-time lead.

St Helens hit back in the second half with Sia Soliola going over, but Thomas Bosc converted two penalties.

Visiting prop Michael Simon was sin-binned, but Alex Walmsley's try for Saints was not enough with Ian Henderson scoring for Catalans late on.

Nathan Brown's side have now lost three out of their last four games, and desperately missed the influence of experienced players James Roby and Tony Puletua.

Defences were on top in the opening exchanges, with neither side being able to penetrate the try line and France international Bosc's attempt at a penalty on 20 minutes drifted wide of the post.

Having been the better team in the first half, the visitors took a deserved lead. Gregory Mounis spun away from a St Helens tackle, before the ball eventually reached winger Vaccari who scored in the corner, with Bosc converting from a narrow angle.

Youngster Escare had a try ruled out, but the Dragons did go further ahead just before half time. The home defence was unable to cope with the quick handling from the French side as Damien Blanch looped a pass to Escare, who was not to be denied this time.

Following a poor first-half showing, Saints came out after the interval and got themselves on the scoreboard. Soliola broke through the Catalan back line and exchanged passes with Jon Wilkin before bundling himself over for Saints' first try.

Bosc popped over two penalties to stretch the lead to 10 points, but Simon was sent to the sin bin for holding down with 12 minutes left and Walmsley's try set up a thrilling finish.

Louie McCarthy-Scarsbrook was stopped inches short of the line with a minute to play, and then Henderson went up the other end to clinch a well-earned victory for Catalan.

"I can't fault the guys' efforts and commitment. Alex Walmsley was great and is getting better, as are Mark Percival and Adam Swift.

"The game time the youngsters are getting is invaluable for them and their rewards will come. Obviously we'd like them to come this year but sometimes it takes a bit of time.

"We should get a lot of confidence out of tonight. We withstood a lot of pressure. We're trying hard but we just need to get a bit smarter."

"The fightback from St Helens was terrific but we did enough with our defence at the end. It was a tough game but our forwards played well. That's our strength at the moment.

"We spent a week here to try and come up with a good performance and we did that.

"The first half was a good arm-wrestle which we won but we were a bit anxious in the second half.

"I'm really happy for the work the boys did, especially with 12 men. They wanted to do it for Michael.

"St Helens had a lot of quality players injured and I thought the quality of our bench was the difference."