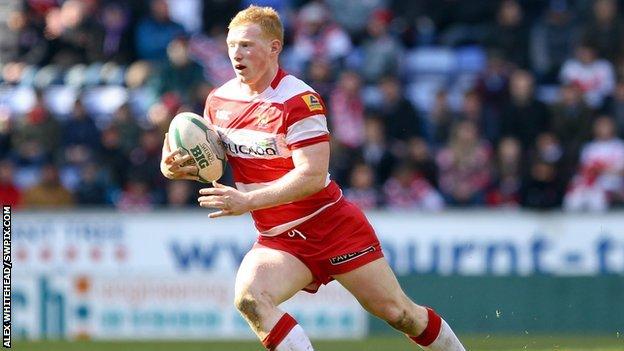 Wigan forward Liam Farrell ran in a first-half hat-trick of tries as the Super League leaders eased to victory at Odsal against Bradford.

The Warriors led 30-0 at the interval, Farrell's treble being supported by Blake Green and Jack Hughes, who got Wigan's other two converted tries.

Sam Tomkins got in on the act straight after the break, fit-again Pat Richards adding his sixth goal of the day.

The Bulls finally replied when Jarrod Sammut converted his own try.

That took his tally to 14 for the season, making him Super League's joint top scorer with Tomkins and London Broncos winger Kieran Dixon.

Farrell caught the eye with his devastating finishing, twice taking advantage of defensive errors, to maintain his remarkable scoring rate as his try count reached double figures for the season.

This was a first defeat in four matches for Bradford, who had Luke Gale returning from an ankle injury.

But, after opening up a 36-0 lead two minutes into the second half, the only surprise was that Wigan then went scoreless for the rest of the match.

"I was really impressed by some of the tries we scored in the first half.

"But we were not consistent enough for me. The second half was awful, although the pitch was very sandy and the players said they were fatigued.

"I rate Liam Farrell. We've got some good back rowers and he was good again. His consistency is outstanding.

"I don't think his defence has been outstanding this year but he runs hard. There is a lot of improvement in him but I'm very happy with where he's at."

"Credit to Wigan for how they started. We came up with some yardage errors and, when you give up field position to Wigan they are very ruthless.

"It ran away with us in that first half and it was always going to be tough from there but I was happy with the second half.

"I'm not too disheartened. Wigan will do this against other teams. I've told the boys we've just got to start again. We will be better for it.

"Luke Gale was buzzing around. I expect him to get better from now on. He was a general out there. He gave us some direction."