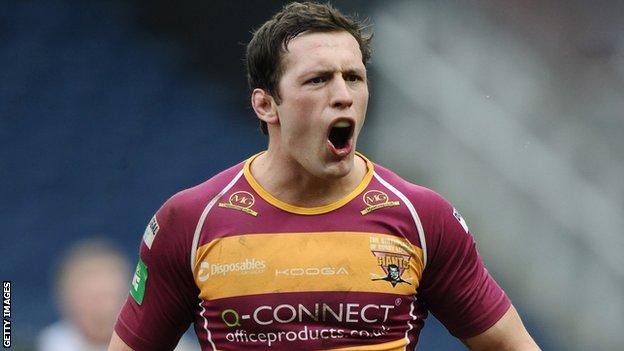 Huddersfield held off a brief fightback to put Hull KR to the sword late on and stay within a point of leaders Wigan.

The Giants raced 20-0 ahead after four goals from captain Danny Brough and scores from forwards Craig Kopczak, Michael Lawrence and Shaun Lunt.

Rovers fought back with tries either side of half-time pulling the score back to 32-24 with 20 minutes to play.

However Huddersfield then blitzed the visitors with three tries in eight minutes to reach 50 points.

The home side started the game the brighter, their pressure telling when prop Kopczak latched onto Lunt's pass from dummy-half to barge over.

Obstruction from Rovers winger Alex Brown in attack gave Huddersfield a penalty and it proved costly as second-row forward Michael Lawrence stepped past a weak challenge from Michael Dobson to make it 10-0.

Brough converted both scores, adding a penalty before Brett Ferres was given the freedom of the John Smith's Stadium to romp down the middle of the pitch and lay a try on a plate for supporting hooker Lunt.

Hull KR hit back after being dominated in the opening quarter, scoring twice in five minutes through stand-off Craig Hall and full-back Greg Eden in their first real attacks.

A measured set of six brought Rovers close to the Giants' line, quick passes from Adam Walker and Josh Hodgson allowing Hall to slide under the posts.

Dobson then played in Eden, the Aussie scrum-half adding the extras to make it 20-10.

But the momentum at the break was with Huddersfield as centre Joe Wardle went over in the corner after a fabulous weaving run from Brough dragged the Hull KR defence out of position.

A quiet start to the second period saw neither side threaten the try-line until the Huddersfield defence converged on Dobson after he burst through.

He again off-loaded to Eden and the full-back grabbed his second of the afternoon.

Brough then drilled a kick through the Hull KR defence for full-back Scott Grix to gather and score.

But the hosts could not keep a stranglehold on the game as Rovers scored two tackles after kick-off, Hall playing-in second-row Constantine Mika, Dobson converting to make it 32-24.

The Giants then went up a gear as Lunt provided the dummy-half with an overlap to score in the corner.

A 30-yard break from prop Eorl Crabtree, followed by a pass from Danny Brough, put Ferres over to make the game safe.

Wardle then grabbed his second (and Huddersfield's eighth) try of the game after another Brough pass before a late consolation from Rovers winger David Hodgson rounded off this high scoring encounter.

"We went 20-0 up and then got carried away and let them back in it.

"We've got to put teams to bed and keep an eye on the points difference.

"To concede 30 points at home is not good enough.

"We've now shipped nearly 60 points in the last two matches. With where we want to go, that's simply not acceptable."

"We weren't good enough early on and it's always tough to try and defend seven straight penalties.

"Huddersfield played really well but our start was poor and we definitely need to fix how many penalties we gave away.

"We didn't have enough possession. In the first half they had 80 play-the-balls to our 39 so it's difficult to be in the game.

"We scored some nice tries but didn't give ourselves enough opportunities to score.

"I don't think the scoreline reflects the game and to be honest I actually though we defended pretty well in the second half but we've still conceded four tries."