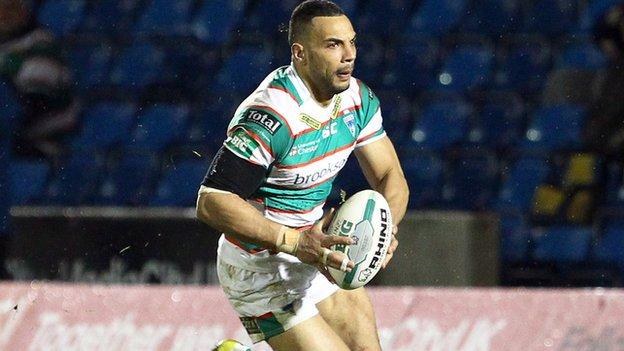 Warrington overcame Wakefield's lively comeback either side of half-time to win an exciting game of 13 tries.

The Wolves led 24-6 just before the break after tries from Ryan Atkins (2), Stefan Ratchford and Joel Monaghan.

Two Peter Fox tries, followed by one from Reece Lyne, added to Paul Sykes' early try, brought them back to 22-24.

But Monaghan and Ratchford each added a second before Richie Myler got on the scoresheet, Brett Hodgson landing six from seven kicks and a late drop goal.

Sykes also got a second for the Bulls, whose other second-half try scorer was Sam Wood.

Tony Smith's Warrington twice looked to be in complete command.

But Wakefield, would not make life easy for them.

After getting within two points with Lyne's 53rd-minute try, they closed again late on to 34-40 with five minutes left.

But Sykes failed to find touch with a penalty, Kyle Amor gave one away at the other end and that set up the chance for Hodgson to finally finish them off with his late one-pointer.

Warrington, losers at Leeds a week ago, now take a break from the league to start their Challenge Cup defence against Keighley next week.

Coach Smith confirmed that veteran half-back Lee Briers will make his return from a two-month absence with a neck injury.

"We were doing good things for large part of the game, but we know we have defensive things to work on too.

"This has been the hardest six weeks of our season and we were happy with large parts today. Our attack came back well, even if we started sloppily.

"Defensively, we were a little off and, against a team with as much quality as Warrington, we don't need to give them a start. But I applaud us for coming back. We look like we have plenty of points in us."

"We tried to bite off more than we could chew. We would back ourselves to score from anywhere within a set of six without that."

"We were mixed all over the place. There was some good, some bad and some in between.

"Our attack was good and I liked some of what we did but, defensively, we were way out.

"We knew we would get tested as they are a good team with experienced players. We knew they would ask questions but we didn't have the answers.

"We have things we need to address and we are not shying away from our defence. We had a healthy lead and it would have been nice to have closed it out."