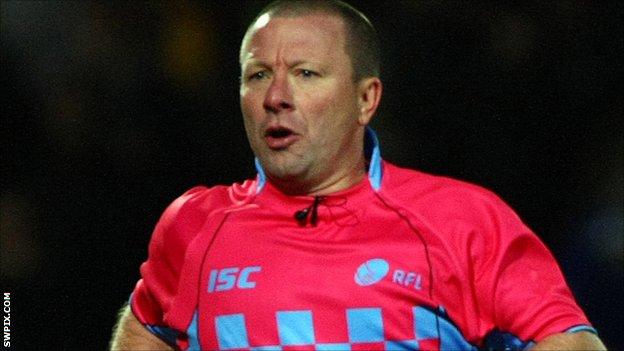 Steve Ganson has retired from his role as a match-day referee, the Rugby Football League has confirmed.

The 43-year-old had been an official since 1995, taking charge of his first Super League game featuring Castleford and Paris a year later.

St Helens-born Ganson will now work with the Match Officials department in a coaching capacity.

"I have been very fortunate to have enjoyed the career I have, the last 23 years have taken me on a fantastic journey and given me experiences I'll never forget," Ganson told the RFL website.

"This move has all come about very quickly, but opportunities like this don't come along very often and I'm really excited to make the move into coaching.

"I feel the time is right and whilst I know I'm going to miss refereeing, there are no regrets, just a genuine sense of anticipation at what lies ahead.

Jon Sharp, currently technical director of the Match Officials department, has been promoted to lead the operation following the exit of Stuart Cummings last month.