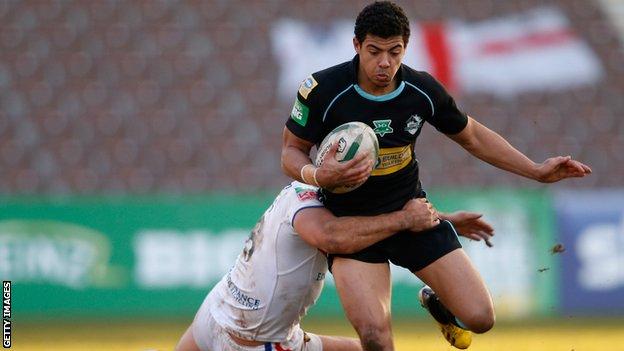 Super League's most potent winger is only 20. He remains relatively unknown and plays for a struggling club who turned him away as a teenager for being too small.

Kieran Dixon's story is one that gives hope to any youngster's dream of becoming a professional sportsman.

His career remains very much in its infancy, yet only his second season as a professional could still end with a World Cup appearance for England.

"The World Cup is definitely the aim," Dixon says. "I try to keep that at the back of my mind so that I can keep scoring tries for London. I just hope my performances continue and that [England coach] Steve McNamara recognises what I am doing down here.

"I've never spoken to him about whether I have a chance, nor had any dialogue with anyone from the England camp. I just go to training and then to games and try to show my class with the Broncos."

Dixon is level at the top of Super League's try-scoring charts, alongside Wigan full-back Sam Tomkins and Bradford's Jarrod Sammut, on 14 - but he had no idea.

"I knew I was up there a while back which was a great achievement," he adds. "But I haven't looked for a while so assumed they'd caught me up."

It is that kind of single-minded focus that has helped 5ft 7in, 12-and-a-half-stone Dixon defy the odds to carve out a professional rugby league career.

He first picked up a rugby ball as a 12-year-old year eight pupil and says: "I loved football and never fancied rugby.

"But I found rugby gave me a way of releasing my aggression. The sport took hold of me. I played both for a while but soon decided I wanted rugby more."

That decision was met with almost immediate words of caution: "I was told I was too small. I have always been told that and, for a while, it seemed they were right.

"I was turned down by Harlequins when I was 16. They told me my body wasn't big enough to cope with professional rugby. I took it on the chin and went to play for Hemel.

"As soon as I got in the first team, the coach told me the same. He was worried that I wouldn't be able to handle the physical contact because of my size.

"It isn't nice being told something you have no control over could stop your dreams. Luckily at Hemel they gave me a chance despite their doubts. In my late teens I started to mature and that's when it happened for me."

On the back of that, Harlequins RL, now back to being named London Broncos, handed Dixon a second chance and he says: "I'm so pleased they changed their mind.

"I thought my chance had been and gone. It has never been about proving London wrong. As a team, we want to prove others wrong. Most people would say we can't make the play-offs but I think we can be a shock to the big clubs."

Dixon has a year left to run on his London deal and they may struggle to keep hold of him, especially given the usual uncertainty surrounding the Super League licences applications - we are in year two of three in the current licence period.

When asked about a switch north, the winger's reply will do little to allay fears that he may move.

"London's where the heart is, even though they didn't want me," he says. "But I have to think about myself and make my career better and go to bigger and better places. If that means moving on that's what I will do.

"If London don't get a licence, and I was offered something elsewhere, I'd hope the fans understand. I love London and want to be here but I also want to have the best career I can possibly have."

Dixon accepts he would love a bit more limelight. "Rugby league isn't big down here so nobody knows who we are, which shows in our crowds," he says. "I'd love to be recognised walking down the street. It would be a cool feeling knowing someone you have never spoken to knows who you are."

If his progress continues, then he may have the national limelight to look forward to in the autumn.