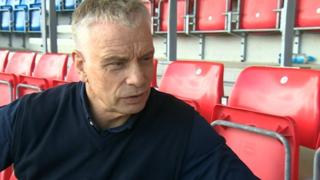 New head coach Brian Noble tells BBC North West Tonight that he is excited by the challenge that awaits him at Salford City Reds.

The Reds are bottom of Super League, but have ambitious plans for the future and former Great Britain coach Noble adds that he did not need much convincing by owner Dr Marwan Koukash before agreeing to take the job.