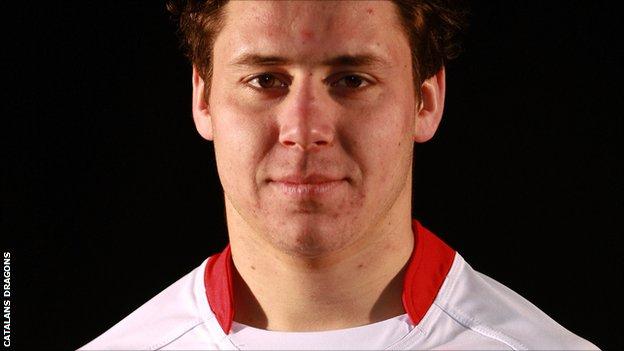 William Barthau's hat-trick helped Catalans Dragons to a comfortable victory against Championship side Hunslet in the Challenge Cup.

Further scores from Barthau, who completed his treble, Baile again and Eloi Pelissier completed their scoring.

Andrew Yates and Danny Grimshaw ran in the Hunslet tries.

Not even the dismissal of Ian Henderson could halt the visitors' march to victory, with Laurent Frayssinous' side playing around 53 minutes with 12 men after the England hooker's late hit on Liam Helliwell.

The home side had an early taste of what was to follow when they conceded inside the first minute, as Barthau dummied his way over, and Blanch penalised a sloppy pass by racing to the whitewash from deep inside his own half.

Bosc converted his own try and then put a high kick in for centre Baile to score, and Taia was on hand to gather Mathias Pala's touch-back soon after to complete the first-half action.

Bosc's kick again assisted Baile, before Hunslet got themselves on the board thanks to Yates' score, supplied by James Houston's prompting.

Pelissier and Bartheau scores took Catalans up to 50 points, while Grimshaw's consolation ensured something to cheer for the home crowd in the latter stages.

"They are a very physical side and at times we struggled around the ruck with them. They lost a man sent off but that disrupted us more than them because we lost our influential scrum-half Luke Helliwell.

"Losing Luke for so long really affected us.

"The boys put in a fantastic effort because there was a massive 75-25 possession difference in the first half and 60-40 in the second. I am perplexed at some of the reasons for that, but the Catalans were very quick to grab an opportunity with both hands.

"We were held up over the line twice, had two tries ruled out and they scored from two interceptions, so my lads put in a good stint and I've told them I am proud of their efforts."

"We had a few young kids in the side with no experience so I decided to play Thomas so he could look after them and set the right example. I was very pleased with him.

"All credit to Hunslet for never giving up. We were a bit soft on the ball at times but we did enough to reach the next round, which is the most important thing. I need to watch a replay of the sending-off. I know it is forbidden to shoulder charge but it is pretty tough for a referee to decide whether to send a player off or put him on report.

"I just want the call to be consistent. If the replay shows Ian [Henderson] deserved to be sent off I'll have no problem with that."