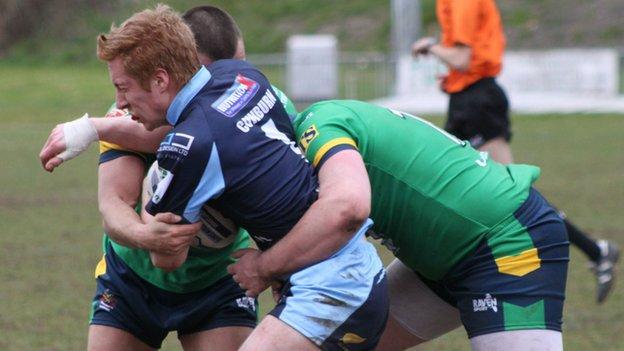 Gloucestershire All Golds coach Brad Hepi is confident his side can overcome Super League opponents Salford in the Challenge Cup fourth round.

The All Golds, in their first season in semi-professional Championship One, host the Reds on Sunday having never faced a top-tier club.

"We're not going to underestimate them in any way but everyone knows what happened with David and Goliath."

"We've got to perform and hope the Reds have an off day. We're way under-performing at the moment but this might be the game where the guys get a bit of confidence and kick-start our season."

The All Golds progressed to the fourth round after a 26-16 victory over Skirlaugh.

However, both sides have been struggling to find form this season. The All Golds have lost both of their opening games in the league, while Salford currently sit bottom of the Super League.

Former Gloucestershire coaching consultant Brian Noble was unveiled as the Reds' new coach this week and although he will not take charge until Monday, Hepi says Noble will still have an influence.

"Although they're at the bottom of the table they're still a quality team," continued Hepi, a former Salford hooker.

"I've played against Nobby [Noble] in my career and he's a great bloke.

"I wouldn't underestimate the fact he's probably had an impact on them already."