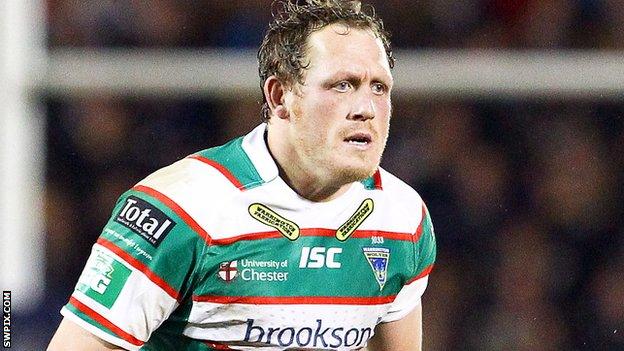 Ben Westwood passed 100 career tries for Warrington as the Wire eased to victory over struggling Salford.

Ex-Salford man Stefan Ratchford scored a try and kicked 10 goals for the Wolves, who stay third in the table.

Salford's performance, meanwhile, will give head coach Brian Noble and owner Dr Marwan Koukash - who spent the final 20 minutes of the game standing with the travelling supporters - lots to think about as they plan to make the Reds a more competitive outfit in 2014 and beyond.

Humpty Dumpty fell off the wall. But it's great this week, we get to put it back together again

Westwood's first two tries came inside the first five minutes, collecting passes from Higham and then Simon Grix to barge over.

A looping pass from Lee Briers sent Joel Monaghan over for his first of the game, while Myler was the creator for Currie's two scores.

Sandwiched in between Currie's brace, both set up by scrum-half Myler, was an effort from Broughton, who showed a neat side-step to get past Monaghan and touch down.

Warrington ran riot at the start of the second period, with former Salford duo Myler and Ratchford tormenting their old club, setting up each other for tries.

Westwood completed his hat-trick with another robust effort, while late scores from both Monaghan brothers and hooker Higham showed Warrington's dominance.

"It was a pretty complete performance. We were very committed.

"The easy thing would have been to not compete at our best. We have had some recent hit-outs and won fairly comfortably. To stand up and deliver again took some commitment and some overcoming of the complacency tag you could have before a game like that.

"There were no aspects of that shown there. Our boys were very good and they stuck to the task they set out to do today."

"I think we played a really good team. The quality and speed of some of their execution was there to see.

"After the strides we made last week [by beating Widnes], Humpty Dumpty fell off the wall. But it's great this week, we get to put it back together again.

"I thought the Salford fans were terrific. They sung really loudly and proudly and it is important, when we are back at the Salford City Stadium next week, we appreciate that and respond in the manner the players can."