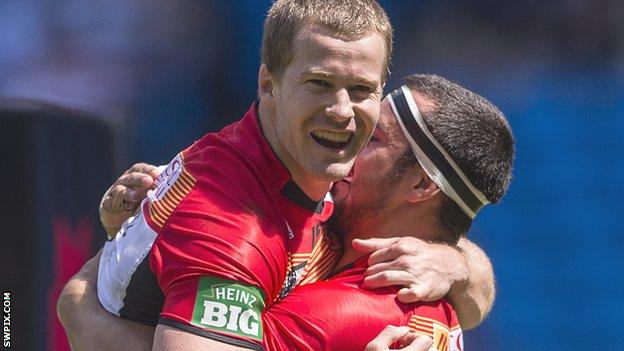 Meanwhile, Dragons half-back Scott Dureau was given the all-clear by doctors after complaining of double vision during the second half.

The Australian recently had a tumour removed from behind his eye and only returned to action after a nine-month absence last weekend.

He was taken to hospital but was later told the issue was unrelated.

A spokesman for the French club said: "Scott is fine. He got a knock in the game and that gave him a little bit of double vision.

"It's not connected to what happened before and he's now waiting to get the all clear to go home."

The scrum-half will have further tests upon his return to France.

News of Dureau's health scare understandably took the shine away from an excellent game, which contained 12 tries and plenty of incident.

Escare crossed twice before the break, the second a stunning 80-metre dash, but his side were 14-12 down at the interval thanks to tries from Paddy Flynn, Owens and Cameron Phelps.

Frank Winterstein added the first of his brace of tries for Widnes after the restart, but Catalans came surging back as Escare completed his hat-trick and Vincent Duport, Zeb Taia and Kevin Larroyer also touched down.

But Owens and Winterstein scored to bring the Vikings within two points, before teenage winger Owens held his nerve with a late kick to give Widnes a share of the spoils.

"I thought it was a point lost. We are really disappointed we switched off at times.

"The tries they scored from kicks and dummy half - these are the things you can forgive. They are a team with real quality but we got ourselves in a position to win and then went soft.

"I honestly believe we are two inches off being a top-eight side. Look at the games against Castleford, Wakefield, Salford and now today - we are losing games by two points and they are difficult ones to take."

"I'm not happy with the boys. We didn't respect the ball. I'm not happy as we didn't do the right things, but credit to Widnes - they stuck in there.

"We didn't play as well as we could. We could have lost but we got a draw. It could be worse but I'm not happy."