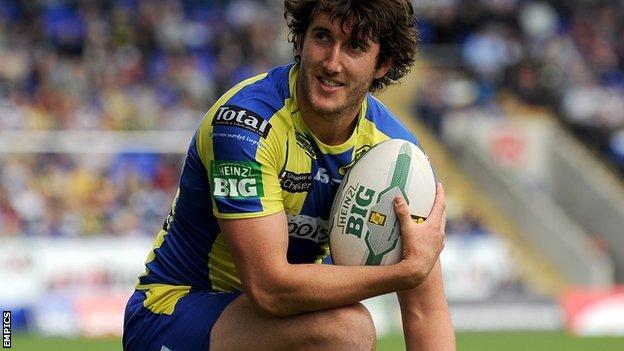 After going in 28-4 up at half-time, Wire were devastating after the break, touching down 10 times as they added a further 54 points to their total.

It took nine minutes for the Wolves to open their account, as Hill broke through the Broncos defence to score under the posts.

Having beaten Broncos 54-20 in the reverse fixture in April, the visitors soon began to take control, Joel Monaghan latching onto Lee Briers' kick to bundle over before Michael Monaghan twisted and turned to reach for the line soon after.

Myler then broke through some weak tackles to score a fourth try before more poor defending allowed Michael Monaghan to touch down for a second time.

Dixon collected a long pass from Luke Dorn to open Broncos' account for the afternoon but the Wolves resumed their dominance soon after the break when Myler crossed for a second time.

A break from Ratchford then allowed Westwood to score before Ryan Atkins scored Warrington's eighth try in the 49th minute.

Riley twisted over in the corner after Wolves ran on the last tackle seven minutes later, Ratchford then raced over before his break allowed Atkins to score his second.

Mendeika then responded for Broncos, against his parent club, finding the line after Witt's clever kick.

But Wire were not done yet, Grix touching down for his first try before clutching a Briers kick to burst over in the corner.

Higham then strolled over before Grix raced clear to claim his hat-trick.

"I want to apologise to anybody that came today expecting us to compete, as we didn't.

"We seemed to be spooked right from the start and, when they came at us, we couldn't handle it. We backed out of the challenge and that is not good enough.

"We have to go back to basics. "We have to do the simple things right, stop making silly unforced errors and build from the bottom up - we have to be clear minded and grind through this."

"Stefan Ratchford is a super player - a terrific talent. He seems to pop up in positions all over the field and he can slot in easily anywhere.

"I know there are people calling for him to make the England side and I think he will if he keeps performing like that.

"He has to be patient and consistent and, if he does, I am sure he will force his way in."