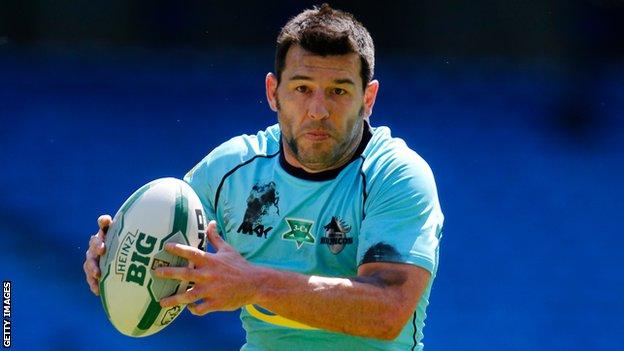 The 35-year-old is returning to Australia after having his contract terminated by mutual consent.

The half-back told BBC London 94.9: "I think the Rugby Football League should help the organisation out.

"London is a big place and there is a great market for it there. It just needs plenty of hard work and it may take a lot of money to do it as well."

The Broncos are currently bottom of Super League, having won three of their opening 17 league games, and are searching for a new venue for their home games.

"They need to work out where they are going to be next year and that is up in the air," he said. "It is tough to run a club when that happens.

"At the end of the day we are a team and our results have not been where they should be. We have had a cup run but on a consistency level we haven't been up there.

"You can always tinker with your attack but defensively you need to be stronger.

"Considering our results haven't been good, we have some great kids coming through the system and they have done a fantastic job with the development programme."

With his wife set to give birth within the next two months, Gower decided to return to Australia following an 18-month spell with the London side.

The dual-code international, who had been under contract until the end of the 2014 season, is set to join NRL side Newcastle Knights.

"It is very disappointing to leave halfway through a season but unfortunately that is how it has occurred," he said.

"I had a fantastic time at the Broncos and would have loved to stay but it is down to personal reasons. The guys understand that."