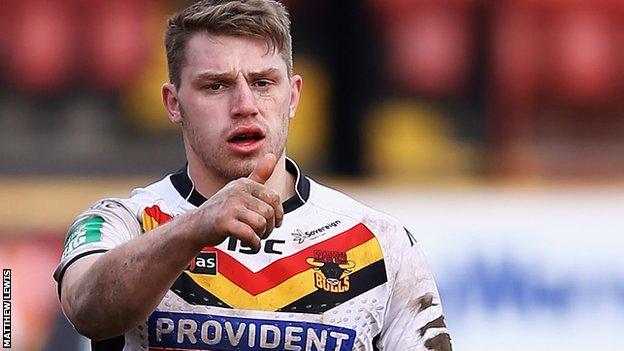 Bradford Bulls second-row forward Elliott Whitehead has requested a transfer, stating he wants to play for a "top-four" club.

The 23-year-old has been placed on indefinite leave by head coach Francis Cummins and will not feature in the Bulls' trip to St Helens on Sunday.

"I can't have players in my squad who don't want to be here," Cummins told the club website.

Since joining the Bulls from West Bowling in 2005, the England Knights international has emerged as a key player at Odsal, following up 15 tries in 28 matches last season with six in 19 so far this term.

Cummins added: "His agent, Andy Clarke, rang me last Friday and told me that Elliott wanted to leave because he didn't feel the progress of the club was what it should be and that he wanted to test himself at a top-four club.

"I kept it professional and decided he would play at Hull KR last Sunday and I then sat down with Elliott first thing on Monday morning.

"Elliott again reiterated what his agent had said about us not making the progress he had anticipated and wanting to test himself at a top-four club."

Hull FC were among the clubs linked with a move for Whitehead last season when the Bulls were beset by financial problems.