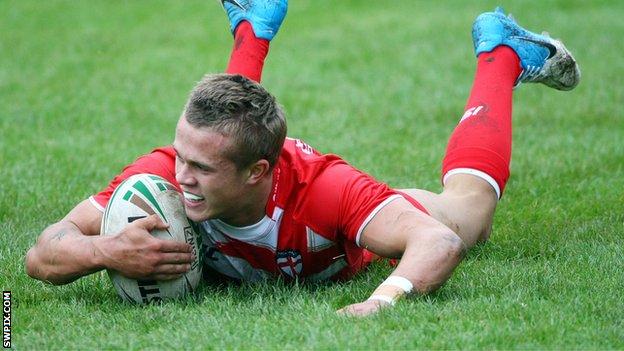 Former dual-code rugby star Jason Robinson says he is proud that son Lewis Tierney is set to make his debut for Wigan Warriors.

The 18-year-old has been named at full-back in place of Sam Tomkins to face Widnes on Friday.

"I'm extremely proud as he's worked extremely hard over the years and now he gets his chance, so he's very excited," he told BBC Radio Manchester.

Robinson was at Wigan for eight years before joining union side Sale in 2000.

"As a father it's such a big occasion, especially with my links to Wigan and making my debut there as an 18-year-old as well," he added.

"There's always going to be added pressure when your father has done well, but I don't put pressure on him. It's just about him getting out there, enjoying it, working hard and doing well."

During his rugby league career, Robinson made more than 300 appearances for Wigan, winning the man-of-the-match award in the first Super League Grand Final in 1998, and he was also part of the Challenge Cup-winning teams of 1993 and 1995.

Following a switch to rugby union side Sale Sharks, Robinson made his international debut for England in February 2001 and for the Lions later that year.

He helped England lift the World Cup for the first time in 2003, scoring a try in the final against Australia, and also had a brief spell as captain of the national side.

Tierney is in his first year as a professional at the Super League club after agreeing a two-year deal, along with five other youngsters.

"He's got to press on and try and do the best he can and be sure this is not just a one off," added Robinson. "His next goal is to make it a regular occurrence.

"He's got to make a name for himself but he's done that. He's got to where he's got to at this moment in time because of all the effort he's put in, not because of what I did in the past, so it's all on merit.

"There is always going to be added pressure but this in the nature of the job. It's Wigan, the biggest club in the world of rugby league."