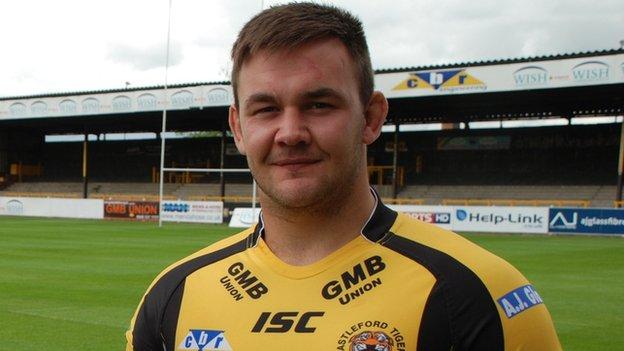 Castleford Tigers have signed former Wigan and Widnes prop Ben Davies on a deal until the end of the 2013 season.

The 23-year-old joins the Tigers for the second time after being released by Widnes Vikings earlier this week.

Davies played seven games for Castleford on loan from Wigan during the 2011 season, scoring two tries.

"As soon as I heard Cas were interested in me I jumped at the chance. I loved it last time I was here and it's good to be back," Davies said.

"I've only been here for one day and I'm reminded already of how good it is. The coaching staff has changed, but Daryl Powell and Danny Orr are great people so I'm up for staying for a long time.

"Coming here in 2011 changed my career because even though I was only here for a short time, I'd only ever been at one club before then.

"For one reason or another things were not working out for me at Widnes so I asked whether I could move on to pursue playing more regularly.

"I feel I've got a point to prove. Last year I played every single game for Widnes and I felt that I proved that I was more than capable of playing Super League every week, even though I'm only 23.

"To have it cut from beneath me this year was really frustrating so I want to play every week and show people what I can do and prove my worth."