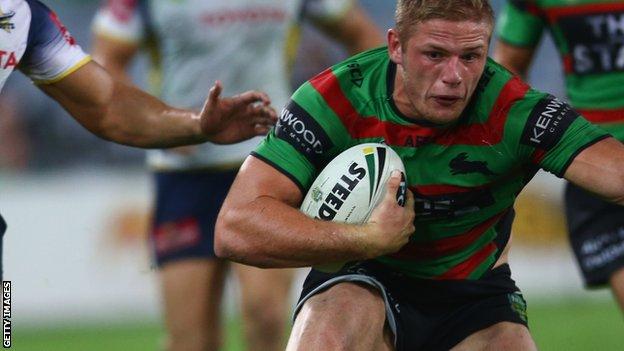 English rugby league player George Burgess has apologised after being arrested by police and charged with causing wilful damage.

The 21-year-old forward is alleged to have smashed a car windscreen after celebrating his side South Sydney Rabbitohs' 30-24 win over Gold Coast Titans in Cairns on Sunday.

Burgess moved to the club from Bradford Bulls in December 2010.

"I have let my team and my family down," Burgess said.

"I would like to apologise unreservedly to the Rabbitohs members, sponsors and everyone in the community.

"It is my responsibility to ensure that this type of behaviour does not happen again."

Burgess is due to appear before magistrates in Cairns on 10 July. South Sydney have stood him down pending "further investigation".

Dewsbury-born Burgess is one of four brothers playing for South Sydney, who are co-owned by Hollywood actor Russell Crowe.

Great Britain and England international forward Sam Burgess, 24, was the first to sign for the club when he left the Bulls in 2009, while 26-year-old Luke followed in June 2011 following his release by Leeds Rhinos.

Tom Burgess, George's twin brother and fellow prop forward, joined his three brothers at the club in August 2012 when he also moved from Bradford Bulls.