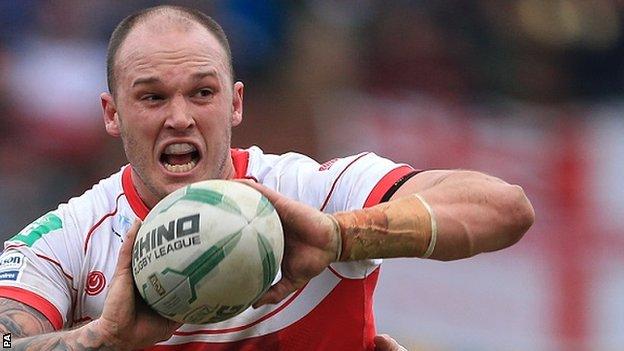 Hull Kingston Rovers have confirmed that Australian forward Cory Paterson has requested an early release from his contract on compassionate grounds.

Paterson, 25, joined the Robins on a two-year deal last winter and has been one of their stand-out players this season.

We're very sympathetic towards his position but ultimately we have the club's interests to look after.

Dobson's future has been the subject of speculation in recent weeks, with Salford in particular being strongly linked with the scrum-half.

Hudgell revealed the Reds have already had a bid for Dobson turned down but that the Australian has a release clause in his contract which would allow him to fulfil an ambition of returning to the Australian NRL.

"Michael is intrinsic to what we're trying to do going forward but the reality is that he has ambitions to play in the NRL again," said Hudgell.

"He has a release clause in his contract which he would need to effect in the next week and I'll be sitting down with him later this week.

"If Michael doesn't exercise the NRL release clause then I'll be speaking to him about extending his contract beyond the end of next season. I'd expect to try and agree a new deal with him during the course of this season and if that doesn't happen then we'll explore other options."

As for Paterson, Hudgell said he has sympathy for his situation.

"Family always has to come first and ultimately, whether it be for good reasons or bad reasons, if a player doesn't want to be here we're not going to stand in his way," he added.

"What will make it an easier decision is if we've found a recruit we're happy with who can come in and replace Cory. We're very sympathetic towards his position but ultimately we have the club's interests to look after and we'll assess the situation on an ongoing basis."