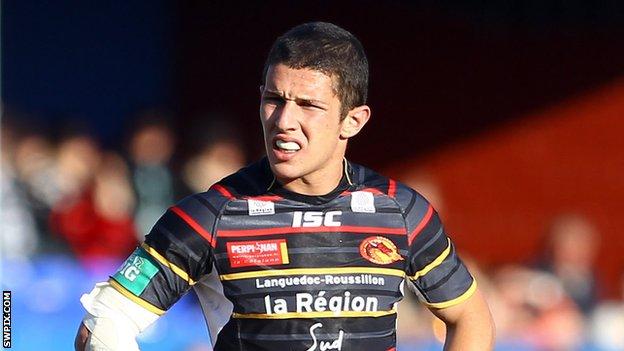 The Dragons had been in a commanding position after running in five tries and led 28-4 at the break.

Scott Dureau extended their lead after half-time but the momentum shifted towards the Broncos on the hour mark.

Mark Bryant and Luke Dorn scored before Dan Sarginson crossed over twice but their comeback was in vain.

Half-back Jamie Soward made his first start for the Broncos following his move to England while Rhodri Lloyd made his full debut for the club after joining on loan from Wigan.

Catalans outside back Zeb Taia opened the scoring on seven minutes from a kick to the Broncos in-goal area by Dureau before Kevin Larroyer made good use of field position following back-to-back penalties to extend their lead nine minutes later.

Morgan Escare finished off a length-of-the-field move started by Taia's offload midway through the first period but the Broncos replied when outside back Dorn fed Jamie O'Callaghan, who crossed in the corner.

However Catalans piled on the pressure, with Escare seizing on a mistake to bag his second try and Thomas Bosc touching down with seconds of the opening half left.

After the break, half-back Dureau nipped in to score and, when France international Bosc added the conversion, the Catalans led 34-4.

But, in stifling conditions in Perpignan, the Broncos began their comeback shortly after the hour mark.

Prop Bryant, returning from suspension, was fed by hooker Ben Fisher and flew into a gap to score.

Dorn then got in on the act as he snapped up a Soward chip to touch down before Sarginson stormed his way over with 12 minutes left.

Their progress was slowed when Soward was left in a heap, with the incident being put on report.

But Sarginson found a way through for his second score to draw the Londoners within six points of the home side.

However the hooter then came, denying the Broncos an unlikely comeback and condemning the basement side to a seventh successive Super League defeat.

"I was pleased with the first 50 minutes but I'm very disappointed with the last 30.

"We have spoken about the performance and not the two points.

"It is not that we haven't won by 30 or 40 points, it is that we were not clinical with the ball. We have got a lot of work to do.

"We wanted to put in a performance to build towards winning next weekend."

"We probably need to start our comebacks a little earlier after the last two weeks.

"We've scored 24 [second-half] points in the last two weeks and we need to start games with that sort of intensity.

"There are two ways to look at it, one that there is enough fight and talent out there and they are showing that but on the other hand, the starting part of the game is clearly an issue for us.

"It was very, very hot out there, and that possibly affected our concentration at the start of the game but that would be an excuse and that wouldn't be acceptable.

"A team without any character would have rolled over, and we showed tonight in the second half, the most important thing we need to do is to show that character from the off and get ourselves into the arm wrestle."