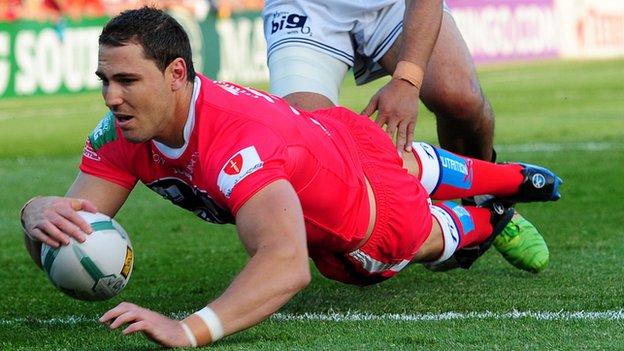 Wakefield edged to within a point of the Super League play-off zone as they claimed a fourth straight win.

Trinity had to overcome the first-half loss of Paul Sykes and Dean Collis.

"It's not often you see it," said Trinity coach Richard Agar. "I can't comment on the incident because I was watching the game. But I hope the perpetrators are held up there and some action is taken against them.

"It's ugly and it's not something any genuine rugby league person wants to see."

Collis went off with a recurrence of a hamstring injury and stand-off Paul Sykes also departed the fray early, with what could prove a serious leg injury.

It took Wakefield just three minutes to open the scoring as centre Collis timed his run to perfection to touch down Richie Mathers's grubber kick for his 12th try of the season.

After Smith added the goal, Widnes hit back on eight minutes when left winger Ah Van took stand-off Kevin Brown's cut-out pass to cross unopposed at the corner and he would have had a second try had he been able to take Hanbury's pass.

Widnes were on top at that stage but Wakefield captain Danny Kirmond, playing with painkillers to defy a finger injury, kept his side in front with two more examples of his inspirational bravery.

He came up with an ankle tap to halt the dangerous Hanbury in full flow and then chased back to bring down Hep Cahill after the Widnes forward had gone 50 metres on a run from deep inside his own half.

They were the highlights of a drab first half until Lauitiiti came into his own, dummying his way over for his side's second try on 29 minutes.

Trailing 12-4 at the break, Widnes thought they were back in it when Hanbury touched down a Brown high kick but video referee Steve Ganson disallowed the try for obstruction by Ah Van and that signalled the end of the game as a contest.

The former Hull KR favourite, the subject of a bid from his old club last week, made the most of a free play after Macgraff Leuluai had knocked on, sprinting into space to find Mariano on his inside.

Mariano then turned try maker with a delightful offload to release Cockayne, who found replacement hooker Wildie in support to score his first Super League try of the season.

Brown then put his brother-in-law Hock through a hole in the home defence on the hour before Hanbury's deserved consolation try four minutes from the end, Owens adding the extras.

"We can get excited about it now. We weren't fluent tonight but we're in the mix and can put pressure on the teams above us.

"We know in the last seven rounds that we've an awful lot to play for. We were fed up of people talking about last year but I think we can draw on those experiences.

"Chalking off our home wins will be important for us. We showed little glimpses of what we can do but the boys know it's not been a

"We don't want to scaremonger but Paul Sykes is going for x-rays. There's a chance there might be a crack in his lower leg."

"We're frustrated. That translates into the way we are playing.

"It was a scrappy game. On a beautiful night, you wouldn't expect that much dropped ball.

"We are a better side than we showed at times tonight but you've got to give credit to Wakefield after losing two players from their starting team. They are working hard for each other. They are a tough side to beat."