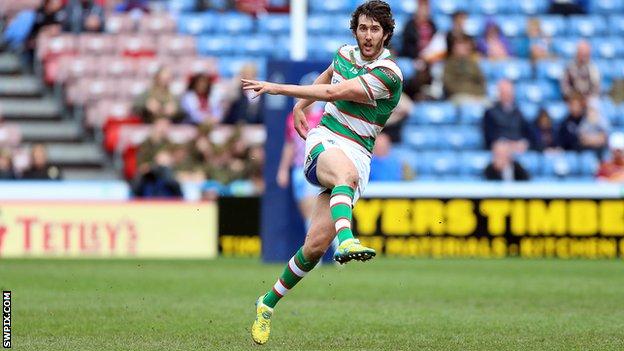 Utility back Stefan Ratchford has warned Warrington to be on their guard as they prepare to face a Leeds side decimated by injuries to key players.

The Rhinos visit the Wolves, who lie third in Super League, on Friday in a repeat of last season's Grand Final.

"Despite the players they're missing, they're still picking up wins," Ratchford told BBC Radio Merseyside.

"With everyone writing them off because they've got this injury and that injury, they're playing with no fear."

The reigning Super League champions have been such as Liam Sutcliffe, Jordan Baldwinson and Alex Foster, who have impressed in a run of three wins in their last four outings.

"If you're in the Leeds academy and near the first team, you've got to have something about you and you've got to be a quality player. There recent results show that," said Ratchford.

Warrington will be looking to avenge their and a win at the Halliwell Jones Stadium will keep the pressure on leaders Wigan at the top of the Super League table.

Earlier this week, on a two-year deal, which will commence in 2014, and 24-year-old Ratchford is excited by their latest addition.

"I've not seen too much of him recently but I know his background.

"If you're getting the captaincy of New Zealand, you're not half bad," he added.

"We're obviously gutted with the losses of Adrian Morley [to Salford] and Garreth Carvell [to Bradford], but to bring someone like Roy Asotasi into the club is a big coup."