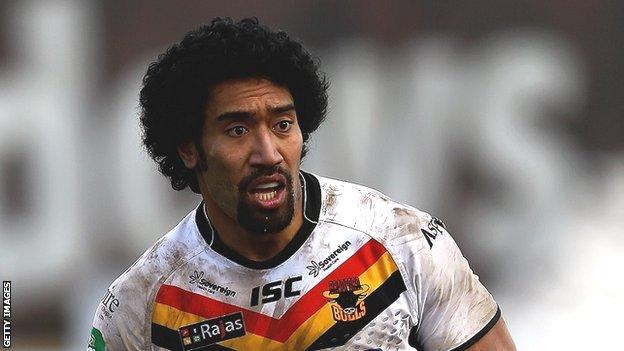 Bradford Bulls prop Manase Manuokafoa has signed a new two-year contract that will keep him at the Provident Stadium until the end of 2015.

The 28-year-old originally arrived on a one-year deal, which was extended by a further two years at the end of last season, but included a clause allowing him to leave at the end of this term.

The Bulls have now moved to secure his services on a longer contract.

"You need a strong pack to take you forward," said coach Francis Cummins.

"To bring in people such as Garreth Carvell is great, but 'Nas' is very important for us too.

"He's improved again this year despite the setback of breaking his thumb, and I reckon he's going to be even better next year too."

Manuokafoa said: "I want to be a part of the Bulls moving forward under Franny and that's why I've signed for another two years.

"There are a lot of very good homegrown players at the club and it's up to the senior players such as myself to help them come through."

Meanwhile, the Bulls have confirmed that scrum-half Luke Gale will return to their squad for the game at Wigan Warriors on Friday.

Oliver Roberts is also included, but Brett Kearney has not recovered from a shoulder injury and misses out and Jamie Langley, Tom Olbison and Jarrod Sammut are also still out.