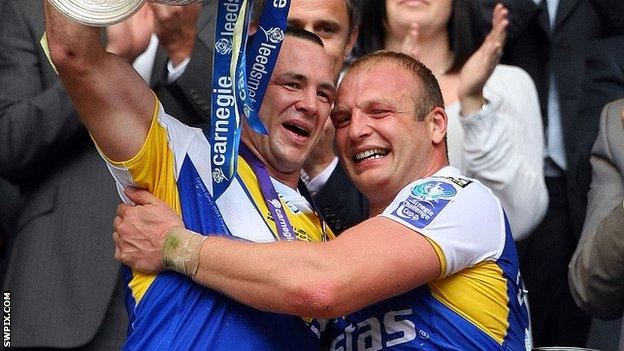 Garreth Carvell believes it would be a fitting finale if he could lift at least one piece of silverware in his final season with Warrington Wolves.

Prop Carvell's five-year association with the Wire will end

Warrington face Huddersfield in a Challenge Cup quarter-final on Sunday.

"I'd love another Challenge Cup victory and hopefully we'll work towards that this weekend with a great performance," he told BBC North West Sport.

Tony Smith's Wolves side have lifted the trophy in three of the last four years, with Carvell appearing in all three of their Wembley victories.

"These are the games you play for," added the England international. "It's the reason you watched it as a kid, so to play in them is fantastic and something I relish every time."

For a club renowned for their continuity of squad selection, Warrington will undergo relatively big changes at the end of the 2013 season.

With Carvell going to Bradford, and this term will present the final opportunity for the current group in primrose and blue to claim more major honours.

As for players coming in, will be the club's first new addition for two years when he joins in 2014.

"I expected to see my playing career finish at Warrington but that's not to be," added the 32-year-old Carvell.

"Having spoken to [Bradford coach] Francis Cummins, there's an opportunity for me to go into coaching after my playing contract has finished.

"It fits all round and it's a challenge I'm looking forward to - getting Bradford back to where they've been in previous years.

"The players that are coming in [to Warrington] and have come in over the past couple of years are excellent players. I think everything will be absolutely fine, if not better."

A has eluded Warrington, but they are in a position to challenge for both the league and cup this year.

Head coach Smith said: "There will be some personal goals there [for the departing trio] but I don't think their desires will have changed from pre-season right through to when they leave.

"Maybe they'll just be a little bit more determined in order to go out on a fairytale note, but we're just concentrating on each and every game. If we do that, we know we'll be in with a chance."

As for Sunday's quarter-final, the Giants lie second in Super League, one point and one place above Warrington, and provide the next obstacle for the Wolves as they look to secure a Wembley return on 24 August.

But, following pulsating home wins against and in the past month, confidence of progression to the last four is high.

"They [Huddersfield] are above us in the league table and it's certainly going to be a good game," said Carvell, who also won the Challenge Cup with Hull FC in 2005.

"We were a little bit disappointed with how we played against Leeds but we've been hitting some good form. It's this week that counts. It's all on this week.

"It helps when it comes to these games that we've got the confidence of having won it [the Challenge Cup] in previous years. That's one thing in our advantage."