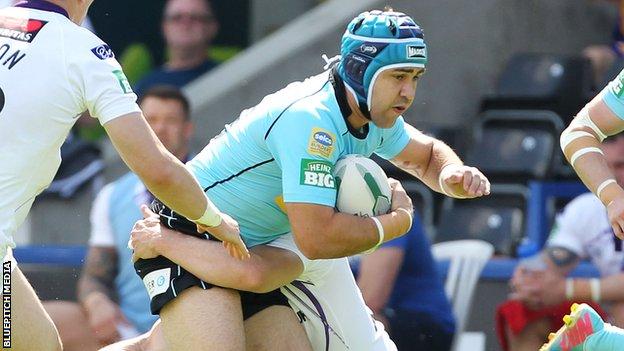 London Broncos booked their place in the Challenge Cup semi-finals with a well-earned win at Championship side Sheffield Eagles.

The Broncos deservedly led at the break thanks to tries from Michael Witt and a brilliant effort from Jamie Soward, Scott Turner replying for the hosts.

Menzie Yere scored a late consolation for the hosts.

The Eagles had been looking to become the first side from the Championship to reach the last four of the Challenge Cup since Hull KR achieved the feat in 2006.

Both sides have enjoyed the Wembley experience in the Challenge Cup, with Sheffield winners in 1998, while London were losing finalists in the last of the competition's showpiece events at the old stadium in 1999.

The part-time Eagles, who are currently second in the Championship behind Featherstone, were playing their final ever cup tie at their Don Valley Stadium home.

Good defence from the hosts and poor handling close to the whitewash stopped the top tier side from taking an early lead.

Inevitably when the first score came it went the way of the Broncos, Tommy Lee's pass converted by Witt after 21 minutes.

Sheffield got on the board when Turner touched down after the Eagles capitalised on a forward pass from the the visitors in their own half.

However, the Eagles, unbeaten in 15 ahead of Friday's game, were unable to build any momentum as Soward scored a superb individual try, beating three tackles to sprint in from 30 yards out, just moments after Turner's score.

Tony Rea's side drew first blood in the second half when a Witt kick was not dealt with by the home defence and Robertson put the loose ball down.

Rodney effectively put the tie to bed when he made the most of a tired backline to run in.

The Broncos sit bottom of the Super League but their class was beginning to shine through and Soward took a drop goal before Rhodri Lloyd touched down their fifth try.

Yere finally got the Eagles on the scoreboard in the second half when he powered over from close range with just over 10 minutes of the match remaining as the Broncos professionally saw the match out.

Victory for the Broncos was a first since their win against Bradford in the last round of the competition in May.

"We didn't give ourselves a chance to show what we're about.

"We made six mistakes in the first six plays and it told in the end. We were fatigued and made poor decisions because we did too much defending.

"But I'm immensely proud of all 17 players out there. Defensively we were very very good, they put their bodies where they needed to do."

"It's massive for the club.

"We're disappointed league-wise but I made it my mission to come and do something special in this club and get to Wembley.

"We knew this would be tough and it was good to play like that in the second half. We kicked well, chased well and the forwards laid the platform."