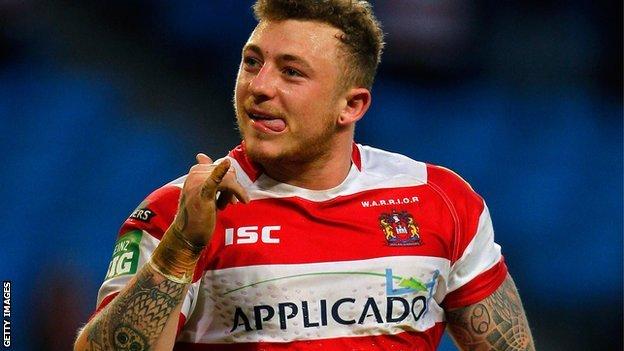 England winger Charnley scored three times in the first half while Sam Tomkins and Matty Smith also went over.

Patrick Ah Van scored Widnes's only try as Wigan went into the break 30-4 ahead before Liam Farrell, Ryan Hampshire and Blake Green all crossed for the hosts.

Pat Richards was successful with all of his eight conversion attempts.

Charnley, who has scored 32 tries so far this season, made the most of handling errors to touch down twice in the opening 12 minutes.

First he intercepted Rhys Hanbury's stray pass and ran from his own half to the line before his second came with a 40-metre stroll to help Wigan to a 10-0 lead.

Tomkins then grabbed his ninth Challenge Cup try of the season after supporting a break by Harrison Hansen and Farrell broke out of his own 20-metre area to set up Smith.

Ah Van then touched down in the corner for Widnes, but Charnley soon swooped on a loose pass by former Warriors half-back Kevin Brown to claim his sixth hat-trick for the club.

With the hosts 30-4 up at half-time it got worse for Vikings not long after the break as Farrell found the line within the opening set of tackles.

Tomkins was then given an early finish by coach Shaun Wane when he was replaced by deputy Hampshire, who soon scored by rounding off prop Gil Dudson's break.

Green completed the scoring following another handling error as Widnes missed out on a last-four place in the Challenge Cup for a 17th consecutive year.

"I thought we played well and scored some good tries. It was good to get Lockers [Sean O'Loughlin] and Sam back.

"We were crisp in our attack. It was our best performance for about three weeks, it just shows what a difference Lockers makes.

"Josh Charnley was outstanding. He has been consistently good for a few months. He works hard in training and it shows with how he plays."

"It was pretty frustrating. I don't think Josh will score an easier hat-trick in his life. They scored nearly 50 points against us but 24 of those we just left on the floor for them.

"We talked about wanting to come here and play and expand our game a little bit.

"It was nothing lost, nothing gained for us today. We chanced our arm but we were a little bit too cavalier at times."