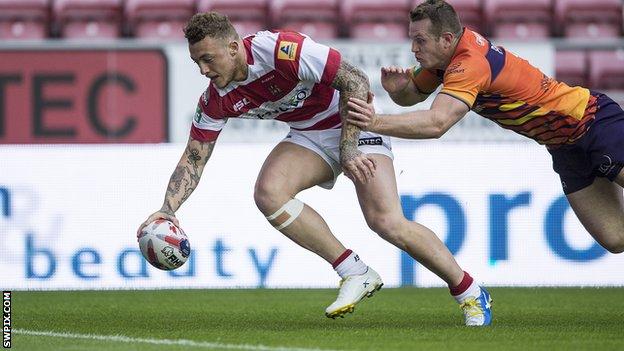 Josh Charnley has said Wigan will not underestimate London Broncos in their forthcoming Challenge Cup semi-final.

Wigan, the current leaders of Super League, will be strong favourites to

"London are a tricky team. They've got some good players so we'll need to play well to get the win against them," Charnley told BBC Radio Manchester.

Wigan have beaten London twice in Super League this season, scoring a total of 112 points in the process.

The Warriors, who last won the Challenge Cup in 2011, ran in eight tries in a comfortable quarter-final victory against the Vikings.

"When you put nearly 50 points on a Super League team that have come to have a real dig, it's a good effort."

Meanwhile, Widnes coach Denis Betts was left to rue another slow start from his team - a problem that has dogged the Vikings throughout the 2013 campaign.

"It was really frustrating," he told BBC Radio Merseyside. "When you look at the first 25 or 30 minutes, the scoreline had already gone away from us. All we'd done was drop the ball and they'd picked it up and scored tries.

"Josh Charnley will not score an easier hat-trick in his life.

"They were basic errors and Wigan capitalise on any mistake you make. We made three or four mistakes and that was it - it was all over."