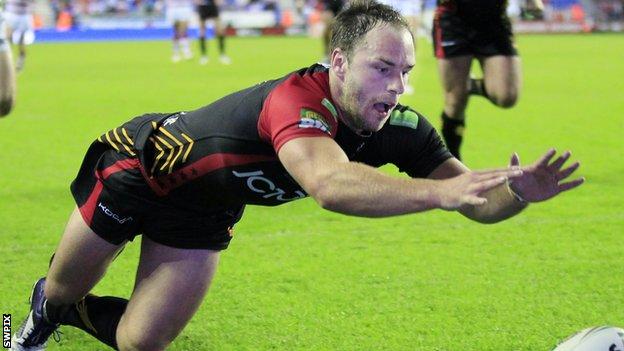 Hull led early through Tom Briscoe only for Bradford to hit back with Jarrod Sammut and Elliot Kear tries.

The Black and Whites again started the brighter after the break and eventually tied things up when Danny Tickle squeezed over and added the extras.

The visitors tired late on and after Gale's drop goal with five minutes left, Diskin sealed the win.

When England winger Briscoe scored after 12 minutes Hull looked well placed for a convincing victory, with Bradford were yet to forge a meaningful attack.

That said, Briscoe's try was clinical, coming from the first true break of the match as he easily side-stepped a poor attempted tackle from full-back Brett Kearney after coming back on the angle to take centre Kirk Yeaman's pass.

And it was Sammut who scored after some sustained pressure, gathering his own kick after Hull winger Tom Lineham had fumbled the high ball.

The Bulls continued to pour forward and centre Adrian Purtell swooped on a bouncing ball to burst through a gaping hole in the Black and Whites defence before unselfishly offloading for winger Kear to cross and Jamie Foster added his second goal of the evening.

The second-half was almost a mirror image, Hull once again the bright starters, levelling the contest on 50 minutes when Tickle scored in what was his first start after 10 games out injured, somehow squeezing over an outstretched arm with three defenders on top of him.

He added an easy conversion and then the Black and Whites seemed to remember this was their fourth game in 19 days, retreating to their own line as the hosts dominated the ball.

Eventually that pressure told when the Bulls manoeuvred under the posts for Gale to slot through a straight-forward drop-goal with the clock ticking down.

Hull were then forced to over-commit and with their defence stretched, hooker Matt Diskin scored to make the points safe.

"The players have shown a lot of heart, especially as we were down two players, having lost John Bateman in the first half and Tom Olbison in the second.

"When you have a bad run you sometimes try and play things a little too safe.

"We have players who can take people on and they need them to do it.

"But that fight is there and they showed it tonight as it wasn't pretty but we got the job done.."

"We had plenty of ball in the second half but the execution wasn't there - maybe it's fatigue?

"We were brain dead at times and your head is the always the first thing to go when you are fatigued.

"It was an opportunity for us to get our season back on track but we missed it."