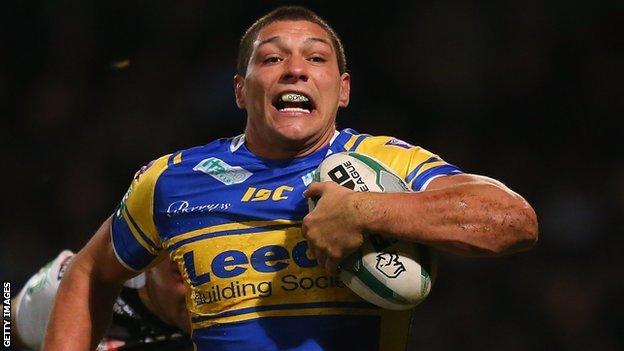 Ben Jones-Bishop scored to put the hosts in front before Andy Raleigh hit back with a simple finish.

Jones-Bishop grabbed his second before half-time and Joel Moon notched the champions' third after the break.

Ali Lauitiiti's score and a Lee Smith goal gave Wakefield hope, but Hall finished off the tie when he touched down Rob Burrow's kick in the corner.

Burrow was on target with the conversion, but there was still time for Trinity's Frankie Mariano to cross for a consolation before Smith kicked the extras.

Leeds, playing with a high tempo throughout, will have dealt a blow to the visitors' play-off hopes, and should have won by more.

Jones-Bishop and Moon both missed chances to improve their side's tally, with Wakefield ruing a host of handling errors.

Both teams will have to assess injuries to key men, Wakefield skipper Danny Kirmond and Leeds centre Kallum Watkins having both hobbled off.

The Wildcats will not have to wait long to try and exact revenge, as the pair meet again next Friday in the return fixture, when the Rhinos hope to have the calming influence of captain Kevin Sinfield back from injury.

"I've got to give Wakefield credit.

"Our offensive game was very frustrating and we should have scored an extra try.

"But Wakefield are a threat. They can attack but I thought defensively we were outstanding."

"We had the momentum in the last 20 minutes and I felt we were going to come home strong, but we came up with some more errors.

"I'm pleased with our defensive effort was outstanding but we got caught out by a couple of kick plays.

"We had a lot of defending to do but I thought our attitude in that area was superb. We just didn't have enough good ball to win the game.