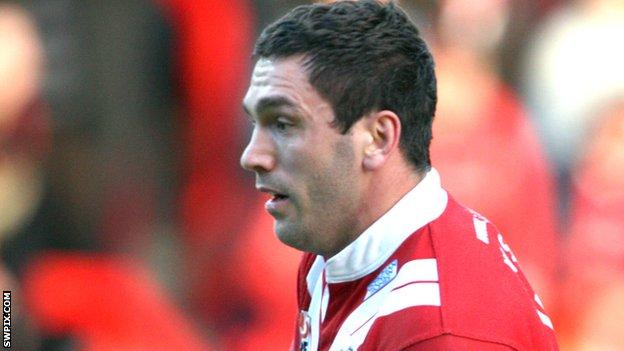 Salford led 6-0 after a tight first half thanks to Andrew Dixon's finish in the corner on four minutes.

Danny Williams was put in by Ashley Gibson to extend the Reds' lead but Elliot Whitehead replied soon after.

Wild latched on to Marc Sneyd's kick to hand the Reds victory, despite Remi Casty's reply for the Catalans.

There was, however, late drama as Dragons saw a Vincent Duport try disallowed for a forward pass, with referee Thierry Alibert placing several players on report as tempers flared in a mass brawl two minutes from time.

Defeat for the French side is their fourth loss in five matches, as they struggled to break down a resolute Salford defence.

Salford took the early initiative with Dixon's try, however skipper Martin Gleeson needed to be taken off following a suspected knee injury in the build up.

After Williams' score put the hosts further in front, Whitehead raced on to a Scott Dureau pass to bring his side to within a score.

However, Salford ramped up the pressure and made it 16-6 with Wild's try, before Casty crashed over to give the Catalans false hope with 14 minutes left.

"The players have come in for a lot of criticism but we dug this one out and our pride was intact. We snatched defeat from the jaws of victory in our last match at Hull KR but this was a really determined show.

"We lost Martin Gleeson early on with a dead leg and Matty Ashurst couldn't go back on with a shoulder injury.

"If we had executed a bit better on attack we could have scored more points and we made it hard for ourselves at times. But our defence was strong and that was vital."

"It was a big improvement on recent weeks.

"Our performance was not too bad but we dropped too much ball."