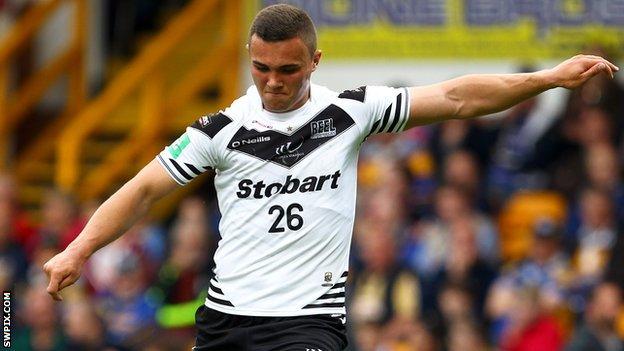 Lawton grabbed a second after the break before a brief Broncos comeback as centres Shane Grady and Ryan Shaw both scored, with Shaw adding the extras.

But Widnes then pulled away to add gloss to the win as the Broncos defence crumbled in the latter stages.

Widnes were dominant from the first whistle and it was no surprise when Owens went over with just nine minutes played, although he could not quite make the conversion.

He could not miss the next goal, though, as Mellor slid under the posts on the half-hour mark to stretch the Vikings' lead.

Second-row Lawton powered his way over in Widnes's next attack and Owens added the extras to give the home side a sizeable half-time lead.

That same combination struck four minutes into the second period to make it 22-0 but it finally seemed to spark the visitors into life.

Former Widnes centre Grady got the Broncos on the scoresheet five minutes later and his centre partner Shaw kicked the subsequent goal.

Shaw then profited from a fabulous Rhys Lloyd break, keeping close to the second-row to take an easy offload and cross in what was the first move after Widnes had kicked-off, before converting his own try to reduce the deficit to 10 with 30 minutes left to play.

The visitors were rampant but the game seemed to change when Vikings centre Stefan Marsh produced a try-saving tackle to stop the Broncos scoring a third try in less than 10 minutes.

Moments later Owens grabbed his second score of the night to effectively end the game as a contest, although he then missed his second kick.

Loose-forward Hep Cahill crossed late on before Lawton sealed his hat-trick as Widnes secured a margin of victory that belied the true nature of the second-half contest.