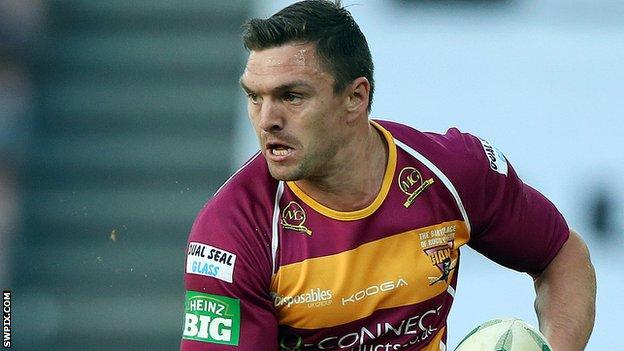 Brough grabbed one of six first-half Giants tries, and converted all six.

Michael Shenton got Cas on the board midway through the first period before their second-half revival began through Justin Carney and Daryl Clark tries.

Cas crossed twice more, pulling within eight points, but Aaron Murphy made it safe late on before a Cas consolation was followed by another Giants try.

At the interval, the Tigers had been heading for a crushing defeat after being torn apart by a rampant Huddersfield attack.

It was Castleford who threatened first however, Shenton making a strong run down the flank before failing to successfully pass to supporting winger Richard Owen.

The Giants made the visitors rue that missed opportunity as a minute later centre Joe Wardle opened the scoring to trigger a Huddersfield onslaught.

Brough intercepted a pass from Tigers centre Jordan Thompson in Castleford's next attack before running 60 metres to slide under the sticks.

Brough was pivotal again in Huddersfield's next move, the stand-off kicking a wonderful 40-20 to move his side up the field, from which point scrum-half Ben Blackmore sneaked into the corner.

Winger Murphy was next on the scoresheet before centre Leroy Cudjoe and Blackmore scored either side of Shenton's try for Cas.

Record numbers were on the cards for Huddersfield at the break but the visitors had other ideas and seemed to come alive when Carney ran from his own half to score just after the restart, with both Clark and Rangi Chase getting on the scoreboard soon after.

When Weller Hauraki barged his way through a string of Giants tacklers and Kirk Dixon added the extras, it was 36-28 with 15 minutes left to play.

As the visitors poured forward, Huddersfield held firm during a 10-minute spell played almost entirely behind their 20-metre line, before Murphy grabbed his second to give them breathing space with 75 minutes on the clock.

There was still time for Murphy to grab his second for the Tigers and for Kyle Wood to gather a loose ball after Cas spilt it just in front of their own try line to give the final score an unfairly wide margin.

"We showed some real intent in the first half and wanted to put down a marker.

"But the second half was disgraceful - I'd said at half-time we have to have the mentality that the game is 0-0.

"We kept trying to score instead of playing sets and putting the pressure on Castleford and too many players thought they were working hard when they weren't.

"It's good to win but we won't stay top of Super League for long if we keep playing like that.

"I had some frank words with the players at half-time and they took it on the chin.

"In the first half we had only half the sets and you can't compete under those circumstances.

"But we showed an attitude change at half-time and scored enough points to win a game - when we were eight points behind I thought the comeback was on.

"There's some key lessons to be learned as we were easily the best side in the second half, but we left ourselves with too much to do."