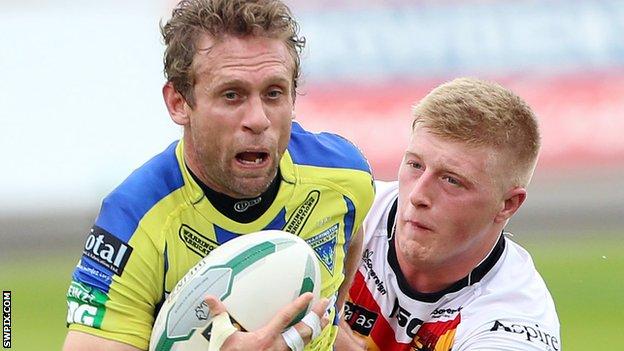 A strong second-half display from Warrington saw them comfortably defeat Hull KR ahead of next week's Challenge Cup semi-final against Hull FC.

The Wire led 12-6 at the end of a tight first half, Rovers forward Jordan Cox replying to Brett Hodgson and Mike Cooper tries.

But Warrington picked things up, Ben Currie crossing before Chris Riley and Michael Monaghan scores on the hour.

Warrington's win over Hull KR is their eighth consecutive Super League victory, a run that stretches back to their 48-22 Magic Weekend win over St Helens in May

Currie went over again late on, adding gloss to an already emphatic victory.

The Wolves made an electric start, full-back Hodgson capitalising on good work from prop-forward Gareth Carvell before adding the extras after only six minutes.

Moments later Cooper was over, Hodgson improving the score again, and Rovers looked set for a very long afternoon in Cheshire.

But it seemed to spark KR into life and after gathering the ball from a Warrington drop-out, the deficit was cut in half when half-back Michael Dobson converted Cox's try before the game fizzled its way to the break.

Proceedings continued to drift along until the 52nd minute when the hosts changed gear, courtesy of a fabulous break from centre Chris Bridge, who split the Rovers defence apart and second-row Currie was the eventual beneficiary, scoring in the corner.

It was effectively over as a contest just after the hour mark, thanks to quickfire Riley and Monaghan scores which were both converted by Hodgson after he had failed to improve Currie's earlier try.

Rovers' defence then disappeared down Warrington's right-hand side and Currie duly took advantage to grab his second of the game, leaving Wire legend Lee Briers to seal a superb win.

"It was a good, tough first half with not much between the sides but we were pretty dominant in the second half and the scoreline probably backs that up.

"I was pleased with our goal-line defence in the first-half, only conceding one try.

"We got a lot better in the second half and saw a bit more footy with quick play-the-balls.

"Our bench lifted us and made a difference.

"Chris Bridge showed some real class off the bench and has worked hard to get back from injury."

"We gave away too many penalties and today was not our day.

"Warrington were too good and are a class side.

"We didn't get the rub of the green but Warrington deserved to win, although for an hour I thought we might knick it but we took some poor options and Warrington punished us."