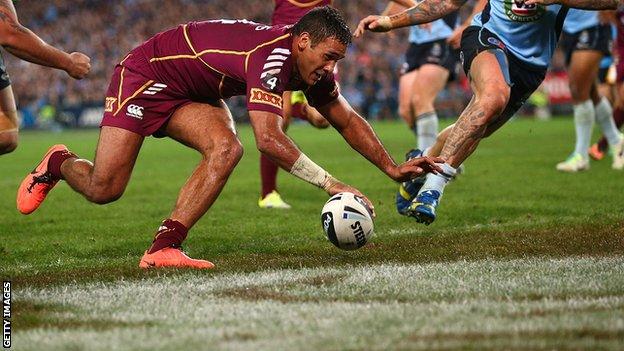 Queensland clinched the 2013 State of Origin series with a narrow 12-10 win over New South Wales in Sydney.

Johnathan Thurston and Justin Hodges scored tries for the visitors, who withstood a fightback from the hosts.

James McManus and Trent Merrin crossed the line for NSW, but Queensland hung on for their eighth straight title.

The rivalry between Queensland and New South Wales, the states where most of Australian rugby league takes place, started when an annual series between the two was introduced in 1980.

Players eligible to play for the Australia national team are entitled to be called up to represent the state upon which they played their first senior rugby league.

The two states play a best-of-three series on an annual basis, and the fixture has grown to become one of the most high-profile in rugby league.

Since the contest was formalised in 1982, Queensland have won 17, New South Wales 12, and two were drawn.

Queensland had a late try ruled out after a pitch invasion by a streaker saw Matt Scott's effort overruled by the video referee.

The Maroons had levelled the three-match series with a 26-6 win in Brisbane, following NSW's 14-6 victory in the opening match.

When Thurston opened the scoring after only 10 minutes, it looked like the Maroons would ease to another State of Origin success.

Thurston wriggled through two tackles and went over near the posts, adding the conversion and a penalty soon afterwards to open up a 8-0 lead.

McManus halved the deficit for the Blues when he broke Billy Slater's tackle to crash over near the corner flag, but Queensland preserved their 8-4 lead to half time.

Hodges collected a short ball from Cooper Cronk to extend the lead after the break, but Merrin set up a tight finish when he powered over the line with a converted try with nine minutes remaining.

But following the delay over Scott's attempt near the final whistle, Queensland ran down the clock to claim the series 2-1.