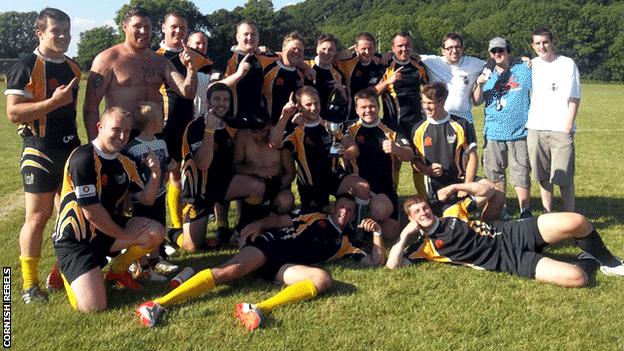 Cornish Rebels chairman John Beach says his side's historic triumph in the South West Cup final can be the launchpad for more success.

The Rebels sealed a thrilling 42-36 extra-time victory over Devon Sharks on Saturday after the match ended 32-32 at the end of a draining 80 minutes.

The victory made them the first Cornish side to win rugby league silverware.

"It's a great start and we can crack on and go for trophy number two now," Beach told BBC Radio Cornwall.

Beach said the serious head injury to captain Kye Beasley, which saw the referee take the teams off the field as an ambulance arrived at Polson Bridge, was the catalyst for a dramatic improvement by his side.

"For certain patches of the game, Devon Sharks wanted it more than we did but at the break we had a chat and said 'this is for Kai ' and came out and did the business," he said.

Beach also praised the decision by Grant Thirlby to kick for goal in extra time to take the game out of the Sharks' reach.

"I think some of the lads would have tapped and gone from 10 yards out but Grant stepped up and said 'no, we've got to kick for goal', he added.

"It was the best decision of the game."

Played in searing temperatures as the heatwave continued in the south west, the match was a see-saw affair with the lead swapping hands several times during the game.

The Rebels - who had beaten the Sharks home and away during the regular league season - opened up a commanding lead during the first half, but ended up needing a late score from James Floyd try to force extra time.

Matt Hodgson's try restored the Sharks' lead but Ashley Lawton's converted touchdown was followed by Thirlby's penalties to seal a memorable triumph for the Rebels.