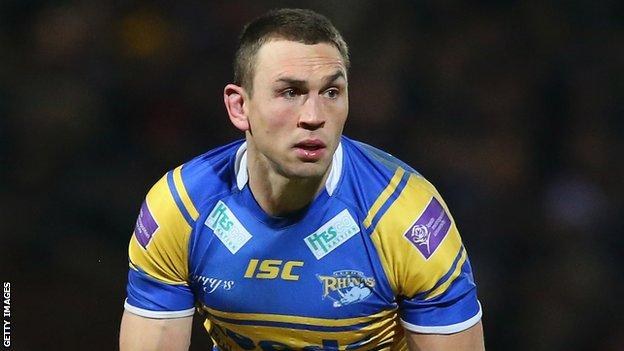 Super League champions Leeds raised hopes of a top-four finish as they came from behind to narrowly beat Wakefield for the second time in a week.

After going in 6-6 at half-time thanks to teenage winger James Duckworth's debut score, the Rhinos were then stung by a second try from hooker Paul Aiton.

But Ben Jones-Bishop and Joel Moon scored before Carl Ablett and Rob Burrow crossed in the last six minutes.

"He had an adverse reaction to a painkilling injection. We didn't know until two minutes before kick-off. It did affect us but we should still have won the game."

His all-important one-pointer was the only thing separating the sides until Burrow scored in the final minute.

The match marked the England skipper's return from a thumb injury suffered last month while on international duty.

Leeds' other stand-out contributors were 18-year-old Duckworth, whose try capped an impressive debut, and Ben Jones-Bishop, who made a big success of his switch to full-back and scored a 95-metre touchdown.

In contrast, the Wildcats, whose other two tries came from Justin Poore and Frankie Mariano, were without their own skipper Danny Kirmond.

They suffered a major blow just before kick-off when the in-form Kirmond had to make a late withdrawal following an adverse reaction to a painkilling injection.

He failed to recover from a knee injury sustained at Headingley last Friday night, when Leeds beat Wakefield 20-18 to claim the first of their two narrow wins over their old rivals inside eight days.

Those back-to-back defeats cost Wakefield the chance to climb into the top eight, with just five games of the regular Super League season remaining.

"I thought last week's game was a cracking advertisement for Super League and this was as well. The two teams really had a dig and it was dramatic at the end.

"Neither team gave in and the result could have gone either way. Had Wakefield won that game, I wouldn't have had a grievance. They deserved something out of it.

"Kevin Sinfield has blown off a few cobwebs. He came up with a couple of choice kicks and a drop goal which influenced the outcome."

"Ducky's been showing up well in the Under-19s and I'm pleased he brought his game into the first team."

"It was another tremendous effort, but one we're not happy with because we felt we didn't learn the lessons from last week.

"At crucial times we came up with some poor plays and wrong decisions. We had pole position once we went in front and we felt we lost it rather than they won it.

"There was nothing in the game, it could have gone either way, but we were just not smart enough at crucial times.

"I thought Sinfield and Burrow were and that was the difference."