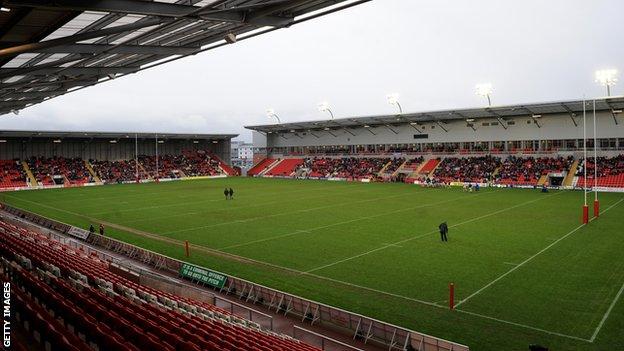 But the RFL said the Broncos had agreed to the possibility in June.

"The semi-final venues were chosen after consultation and agreement with the eight clubs involved in the quarter-finals," an RFL statement read.

"On 26 June, London Broncos confirmed they were 'fine' with the options."

Given the size of London's current fan base, Leigh Sports Village provides the best opportunity to maximise the financial return for the two clubs who share 100% of the receipts generated

The other Challenge Cup semi-final between Hull FC and Warrington Wolves, on Sunday, will take place at Huddersfield's John Smith's Stadium, meaning Hull fans will have to travel about 70 miles and Warrington roughly 40.

However, the Broncos journey to Leigh Sports Village in Greater Manchester will be more than 200 miles, 25 times further than opponents Wigan.

"We've heard a great deal from the RFL at our regular meetings about the importance placed on the development of the game," Mulholland said.

"Why not find a venue in the Midlands and use the game to draw in a new audience?"

The RFL insisted that a number of alternative venues had been considered.

"The final selections were based on various criteria, including availability, size and quality of facilities, associated match costs, commercial viability and the views of broadcast partners," the statement continued.

"London Broncos agreed with the options for all UK-based semi-finals and proposed that in the event of them being drawn against Catalan Dragons, their semi-final should be staged in London.

"Given the size of London's current fan base and their historical levels of travelling support, the view was taken that Leigh Sports Village provides the best opportunity to present a major televised sporting spectacle to attendees and TV viewers in the most positive light while maximising the financial return for the two competing clubs who share 100% of the receipts generated."