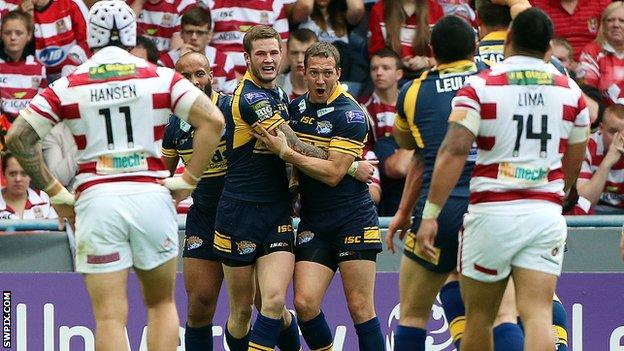 The 2011 winners will return to Wembley on 24 August

Wane hopes the memory of his side's disappointing will be his motivation for victory.

"I don't think I've ever felt as down. It took me a lot of weeks to get over," he told BBC Radio Manchester.

"We went into it very confident and we turned up with a poor attitude. I was devastated. We're working to make sure everything that happened on that day doesn't happen this time.

"I've no stresses about it this time. It's a different group to what we had last year."

While a rejuvenated Leeds were expected to provide a tough test for Wigan in 2012, the Warriors will be strong favourites to progress at the expense of the Broncos, who lie bottom of Super League, on Saturday.

The Rugby Football League have to stage the semi-final at Leigh Sports Village, which is situated around eight miles from Wigan's DW Stadium, but Wane is keen for his side to use what is expected to be a partisan atmosphere to their advantage.

"We've not played many games at Leigh but there will be a lot of our fans there," added Warriors coach Wane. "I want them to make it a home game, be really loud and make it a game to celebrate. Hopefully we can back it up with a good performance."