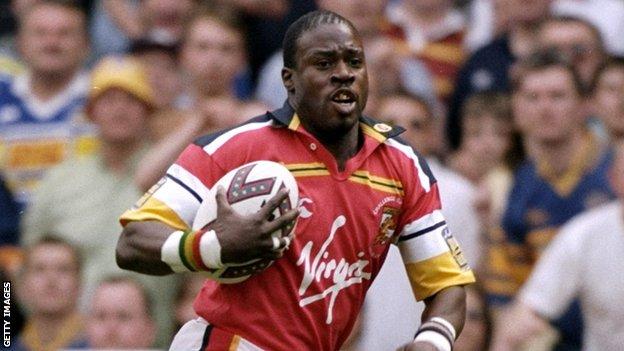 London Broncos are aiming to reach the Challenge Cup final for only the second time in their history this weekend and in doing so emulate the side of 1999.

London's sole appearance in the showpiece Wembley final came 14 years ago, when they lost 52-16 to Leeds Rhinos.

Their first time in the competition's last four since that run to the old Twin Towers comes with the club bottom of Super League.

Former Broncos winger Martin Offiah, who scored the opening try in the defeat by Leeds, says their trip to Wembley was a missed opportunity to raise the profile of the game in London.

Australian prop Steele Retchless played for London Broncos in the 1999 Challenge Cup final and went on to make a club-record 202 appearances for the side.

"To be playing in a Challenge Cup final, in only my second season over there, was such a great honour," he told BBC London 94.9.

"I know there are a lot of great English players who never got a chance to make it. To go to Wembley was such a great experience.

"Growing up in Australia, we'd get up early on a Sunday morning and turn Channel 9 on and they'd have the Challenge Cup on.

"There'd be a sprinkling of Aussies with the likes of Peter Sterling and Brett Kenny. There was definitely interest from Australia. It's a magical time of year when the Cup comes around.

"It was the last game at the old Wembley before it went through its transformation and they were happy times.

"The amount of fans we got there and the noise they made made it a special time."

"If I'm honest, I don't think we kicked on as much as we could have done. We had Richard Branson [founder of Virgin Group, who sponsored the club at the time] leading us out that day.

"Who knows what could have happened if we won?

"There are a lot of question marks over the Broncos going forward. A Challenge Cup victory would make the Broncos a sunny place to be.

"Even if they could just get to the final it would be amazing and would lift the profile of rugby league in London immensely."

Retired London Broncos legend Steele Retchless, who holds the club record for the most appearances for the club, agrees with his team-mate from 1999.

"It's hard to gaze into a crystal ball but I'd have hoped that if we had won in 1999 there would have been a real surge in the grass roots level wanting to play for London," Retchless said.

"Unfortunately it wasn't to be but it would be a real boost if the club could make their way through to the final this year.

"It will give them impetus to finish the year on a high note."

Current Broncos head coach Tony Rea was in the post of chief executive when the club reached Wembley.

"We are still talking about it," Rea said. "It was great seeing Richard Branson and David Hughes [Broncos owner] walking in front of the team at Wembley as it was a great moment for the club.

"Once you get people talking about it it binds everyone up.

"As we did in 1999, it is about the individuals believing in themselves and doing their work. That's what they did and they kept finding ways to keep in the contest.

"It would mean the world to do it and we feel it has got a special flavour as it is London and a London-based final. It would be good for the city."

The semi-final meeting with Wigan Warriors comes at a time of flux for the Broncos; their search for a new home for next season is ongoing, their long-term future is uncertain with a restructuring of Super League on the horizon in 2015, and RFL chief executive Nigel Wood admitted earlier this year that the governing body needs to improve their strategy in the capital.

Moreover, club skipper Tony Clubb, who only took over the captaincy in June following the departure of Craig Gower, could also be on his way out of Twickenham Stoop having told Forty-20 magazine he is "sick of losing" and looking to be released from his contract.

Retchless, who left the Broncos in 2004 and now works in the wine business in Australia, feels the club are at a crossroads.

"When they are not doing well I feel for them," Retchless told BBC London 94.9. "To be brutally honest, we need success.

"Looking from afar, there is a little bit of unrest from players not knowing what is going on and the possibility of moving grounds again.

"I'm sure that will be at the back of their minds.

"The impact of this semi-final appearance has certainly been noticeable already with significantly more media coverage of the club and interest from more casual fans and observers.

"It's reignited the 'spirit of '99', as the club have called it, and a positivity that has been missing after a few years of struggles on the field.

"The ideal reward would be that more people sit up, take notice of the Broncos and this results in increased attendances.

"Yet the London media spectrum is very competitive and the real big impact would only be there if they were to make it to a final.

"A London club has never won a major trophy in the game, and that would be the dream ticket to spur on the sport in the capital."

"If they can get that out of their minds and focus on this game as a big opportunity to do something positive at the back end of the season I think it will do great things for the club.

"We are not sitting where we would like to be in the table but if we can improve next year, bring young guys through and build that grass roots level then the game can still have a healthy foothold in London."

The Broncos have only won three of their 22 Super League games this season while Wigan are second in the table.

However Retchless and Offiah point to previous upsets in Challenge Cup history which could lead to the Broncos pulling off an upset.

"I won't sugar-coat it - it's certainly a tough ask," Retchless continued. "But that's the beauty of the Challenge Cup.

"A lot of fairytales have been written in the past.

"In our semi-final win against Castleford we went in as rank outsiders and the year before no-one gave Sheffield a chance to beat a strong Wigan side.

"I would like more than anything for them to cause an upset."

Offiah admits that overcoming Wigan to reach Wembley would be "a feat in itself" but that an upset should not be ruled out.

"If you have a lot riding on something then you can't be blasé about it," he said.

"If you invest a lot into something you are in for the journey. Nothing is a foregone conclusion.

"Wigan are a well-oiled machine so London are firm underdogs but the result is in question.

"London have an opportunity to do what Muhammad Ali did back in the 1960s and shock the world - and the rugby league world.

"No-one is giving London a hoot's chance but every rugby league player who is retired would swap with them.

"Wigan probably thought they had won in 1998 when they were playing Sheffield and we all know what happened that day.

"That is the beauty of cup competition."