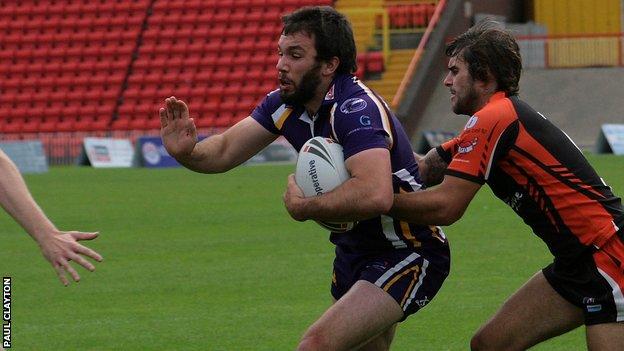 Coach Kevin Neighbour is upbeat about Gateshead Thunder's chances of making the Championship One play-offs despite lying second bottom of the table.

Thunder, who have nine points but have only won once, are 10 points adrift of Rochdale in the final play-off place with five games remaining.

"We think it's a reality that is achievable if we do everything right," Neighbour told BBC Newcastle.

"We'll have to probably win four out of five games."

In spite of nine defeats, Gateshead have collected four losing bonus points which has kept their play-off hopes alive.

"Although we've won just one and drawn one, we've come close on another four occasions where we've lost by less than three points," he added.

"Maybe the season would look very, very different had we won those other games. We'd probably be sat above South Wales [Scorpions] and within two or three points of sixth place which would be the play-offs."

The club has been boosted by the news that they will be able to return to their home ground, the Gateshead International Stadium, within the next two to three weeks, having played most of their fixtures in South Shields due to pitch problems.

"It's been tough in terms of some of the lads who we signed last year still haven't actually played at their home ground," added Neighbour.

"With the pitch now being fit for purpose within the next couple of weeks it should be good for us to actually get a first taste of our home ground this season."