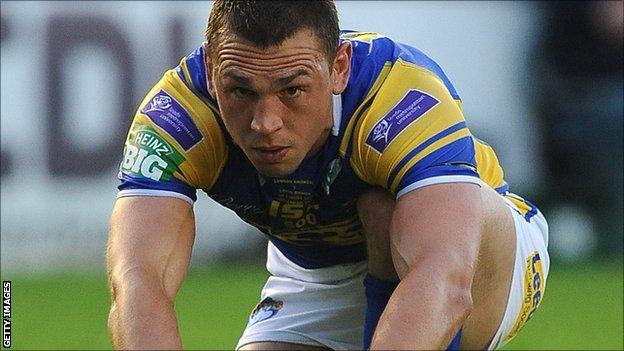 Kevin Sinfield celebrated his 500th appearance for the Leeds Rhinos with victory and five successful kicks against a much improved London Broncos.

Five scores, from Jamie Peacock, Ben Jones-Bishop, Alex Foster plus a brace from Paul McShane sealed a third straight win for the Rhinos.

Tony Rea looked a despondent man when interviewed after last Saturday's humbling, but he will have been far happier with the attacking threat of his side in defeat.

Former Leeds coach Graham Murray passed away last Sunday at the age of 58, and both clubs paid tribute with a minute silence prior to the game and black armbands.

Coincidentally it was with the Rhinos against the Broncos that Murray enjoyed his finest hour in England, lifting the 1999 Challenge Cup in the last final at the old Wembley.

However the loss is little aid to their hopes of avoiding the proverbial wooden spoon with four rounds remaining.

By contrast, Leeds' top four hopes were boosted by a victory which puts them seven points clear of Catalan Dragons in fifth.

Rhinos coach Brian McDermott returned to his former club having lost two of six meetings between the two clubs, but there was no sentiment for the Broncos from his current charges.

It took just five minutes for the Rhinos to go ahead, Rob Burrow kicking to the left corner and after Ryan Hall tapped back, Peacock had the power to crash over.

The lead was increased when repeat sets gave the Rhinos field position, and slick hands to the right eventually put in Jones-Bishop, who went airborne to touch down under pressure.

London's response was immediate and after a huge drive from former NRL Grand Finalist Antonio Kaufusi brought them within sight of the line, Dorn stepped his way over despite Brett Delaney's efforts.

However the visitors ended the half two scores in front when Jones-Bishop took the ball down the right and found the supporting Foster who coasted over, although Ryan Shaw's spill after a glorious Jamie Soward break was a let-off for the Rhinos.

Injuries took their toll on both sides, Delaney limped off with a knee injury while tryscorer Foster's painful collision with the posts saw him also withdrawn.

McShane's introduction brought about two tries, the first darting from dummy-half with Kaufusi left static at marker, and the hooker added a second with a jinky run through weak defence - both of which were converted by the metronomic Sinfield.

Fisher got over for London to lift their spirits, but despite further pressure the Super League Champions stood firm to secure the two points.

"It has been an emotionally draining week so I was really pleased with the effort.

"There is no hiding from the fact that we are really hurting as a club, so to produce a performance like that shows character.

"We have just got to stick together and stay strong as a group. It is going to be tough for us, but we have got to try and finish the season strongly - that is very important to us."

"People thought this was going to be easy after what happened to London against Wigan, but that was exactly the game I thought it would be.

"I thought we were in control for the majority of the game, but we were never able to shrug them off. It was a fair contest at times and I think London deserve a lot of credit for the way they defended.

"In fact, I thought it was a good game overall in the hottest conditions I have ever encountered, either as a player or coach."